Evoking Dylan and the Desert

Attending a concert at the Cabrillo Festival of Contemporary Music is a little like going to new-music camp: No one dresses formally, in the audience or the orchestra; the concerts take place in what looks like a disused gymnasium; and helpful counselors, er, composers tell you all about the music you're going to hear. In the case of "Raise the Roof," the second Cabrillo Festival program, heard on Saturday, the counselors weren't really necessary. Michael Daugherty's Raise the Roof and Ghost Ranch, played before the intermission, are as accessible as can be. Both works are extroverted and ear-catching, with nifty orchestration and lots of interesting combinations of instruments. They're also, quite deliberately, highly pictorial. You might expect a piece called Raise the Roof to be on the rackety side — and it doesn't lack for noise — but Daugherty's title refers primarily to architecture, not to decibels. The piece is structured around two contrasting themes, one medieval and chantlike in character, intended to suggest the vastness of a gothic cathedral, and the other syncopated, jazzy, and urban. Raise the Roof provides a virtuosic workout for a solo timpanist, who must play six timpani using a variety of techniques and mallets, including standard timpani mallets, brushes, and maraca sticks. The medieval theme appears first in the timpani, then solemnly and majestically takes over the entire orchestra. Eventually, it gives way to a salsa-flavored theme, with tremendous bursts from the trumpets and other brass. You feel as if you've moved through time and space, from medieval Chartres to modern Manhattan. A chromatic slide in the strings leads to a spectacular timpani cadenza, and then the strings take the chant theme and present it in complex counterpoint. A jazz-inflected piano solo interrupts, and we're back in New York through to the somewhat abrupt ending. Steve Hearn took the solo timpani part and played with enormous verve and the enthusiasm of a rock star.

Ghost Ranch is Daugherty's homage to the artist Georgia O'Keefe, to her paintings themselves, and to the New Mexico desert that infuses so much of her paintings' imagery and mood. For the first movement, "Bones," he wanted a dry sound, so he scored the opening for woodblocks and for strings using the wood of the bow. They're joined by swooping piccolos and flutes, perhaps representing desert lightning or birds' darting flight. In "Above Clouds," the composer scatters four horns left, right, and center, trying to float the horns' sound above the rest of the orchestra. I'm not sure he succeeded in that, given the earthiness of the horn tone, but he certainly gave the players some arresting music, made more effective by the spatial separation. The last movement, "Black Rattle," seemed to me the least successful of the three, its instrumentation evoking the steppes of central Asia as much as the New Mexico landscape, and sometimes sounding mechanistic enough to evoke Nevada's Hoover Dam instead of anything natural. The audience responded enthusiastically to both Raise the Roof and Ghost Ranch, and I suspect they'd be crowd-pleasers almost anywhere: They're easy to listen to, they're complicated without necessarily being deep, and they contain plenty of bustle and activity. Daugherty is so skilled and economical at creating moods through rhythm and orchestration that he'd be a fabulous composer of movie music. As a fan of the film music of Korngold, Hermann, and Glass, among others, I mean that as a compliment. But I also can't help but think of the New Mexico environment that the orchestral writing in John Adams' Doctor Atomic evokes with greater subtlety and depth.

John Corigliano's Mr. Tambourine Man: Seven Poems of Bob Dylan came into being a few years ago when soprano Sylvia McNair asked the composer for a song cycle. The composer's notes for the piece say that he was not sure what to do, because he had set the words of only four poets during his "adult compositional life." Preoccupied with his own compositional progress during the 1960s, Corigliano had, astonishingly, never heard any of Dylan's music. Reading the singer's lyrics as poetry, Corigliano found them well-suited to his musical style and obtained permission to set them. The resulting cycle, magnificently performed by soprano Amy Burton, is a mesmerizing, haunting, dramatic masterpiece. Listeners who know Dylan's songs may experience vertigo on hearing such iconic lyrics as "Blowin' in the Wind," "Mr. Tambourine Man," and "All Along the Watchtower" in unfamiliar settings. That they work so brilliantly is a tribute to both Dylan and Corigliano. Corigliano's "Mr. Tambourine Man" — and how strange it is to write that — is percussive and syncopated, and more than a bit hallucinatory. The declamation bounces in style between the Schoenberg of Pierrot lunaire and the Stravinsky of Les Noces. Moody and autumnal, "Clothes Line" strikes the first of several Mahlerian notes in the cycle. "Blowin' in the Wind" is a dirge over an ostinato. Doom-laden, it builds to a relentless climax. "Masters of War" starts with an almost jaunty three-quarter-time march that disintegrates into chaos before being drawn out with an incantation, while "All Along the Watchtower" is sardonic and dazed at the same time. "Chimes of Freedom" opens with Messiaen-like birdsong, eventually giving way to repeated chimes (think of the end of Les Noces), and then to an evocation of, or perhaps a direct quotation from, a typical American patriotic song. At the close, three sets of chimes ring out around the hall, surrounding the audience with a welter of impassioned sound. In the last poem in the cycle, "Epilogue: Forever Young," the poet speaks to the audience, with the simplicity and directness of a prayer: "May God bless and keep you always / May your wishes all come true / May you always do for others / And let others do for you." Corigliano matches this simplicity in his setting, which starts with the soloist singing, unaccompanied, a sweet and uncomplicated melody. It's the right choice, after the intensity of "Chimes of Freedom," and yet I wonder if the song doesn't skate just past the sweet and into the cloying. Only more hearings of the cycle will tell. 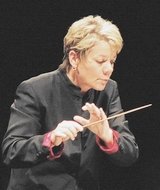 If we're lucky, we'll get to hear it again with Amy Burton and festival Music Director Marin Alsop, who gave the cycle a splendid performance. Burton truly embodied the music and the poetry, from the wails of "Master of War" to the simplicity of "Forever Young," singing with fine tone, diction, and deep involvement, and coping well with the careful, and composer-approved, amplification necessitated by the poor acoustics of the Santa Cruz Civic Auditorium.

As for Alsop, she and her orchestra pulled together this extremely difficult program in only four rehearsals, a testament to the players' dedication and her own tremendous skill. She's a riveting musician, with a masterly sense of momentum, proportion, structure, and drama. The Baltimore Symphony Orchestra is lucky to be getting her as its next music director, and I hope that the San Francisco Symphony will soon be on the long list of orchestras where she guest conducts.