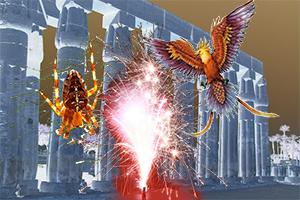 Firebird and Flash With Denève at the Symphony

Mardi Gras, Nubian arabesques, garden insects, enchantments. All were great subjects for four evocative works of orchestral wizardry at Thursday afternoon’s San Francisco Symphony concert, deftly conducted by Stéphane Denève and superbly performed. But why are two of the four only repertoire sideshows? The answer, in my book, is that they are doomed by uninspired melody.

Denève, who first conducted here three years ago, has been described as a champion of French music. He has a knack for nuance and the wherewithal to exploit the full dynamic range of the orchestra at his command, and he did so at every turn to nice effect, with his James Levine-like mop of hair bobbing authoritatively.

The program consisted of Berlioz’ Roman Carnival Overture, Saint-Saëns’ Fifth piano concerto (Egyptian), Albert Roussel’s symphonic fragments from The Spider’s Feast, and the 1919 version of Stravinsky’s Firebird Suite. The first and last of these are concert staples, whereas the others are played once or twice a year at most in North America. All of these pieces have marvelous orchestral effects. Berlioz has a cool tone cluster starting eight bars in that sounds every bit like a trick the contemporary British composer Peter Maxwell Davies used to characterize drinking a slug of whiskey down in his Orkney Wedding, and Sunrise.

Saint-Saëns employs a startling trick of piano harmonics by having octaves played quietly at the interval of a twelfth above the melody. He wrote much of the work at Luxor during a winter vacation, and put a lot of atmosphere, but not much else, in the music. Roussel depicts the entire brief life of a mayfly in gossamer tones, capped by a mini-funeral march. Stravinsky … well, you must already know he has an arsenal of sound effects from his huge orchestra.

But the melodies in the Saint-Saëns and Roussel are as fleeting as that mayfly. Only the first movement of the concerto has any decent ones, and they’re not repeated enough. The concerto has some formidable technical passages that impress audiences. Perhaps that’s why the featured soloist, Jean-Yves Thibaudet, keeps the work in his repertoire. He did a terrific job of execution, and provided a lovely rubato-rich encore, Frederic Mompou’s Jeunes filles au jardin (Young girls in garden). But he’s one of the few soloists who plays the piece. I wish he’d played the Fourth concerto instead, which has melodies as good as Saint-Saëns’ famous Third symphony, but that concerto is inexplicably played even more rarely than the Fifth.

Audience response was warmest for the concluding Stravinsky. Applause dropped off so quickly after the Roussel that Denève was surprised by a silent hall when he returned for his first curtain call. He had to wiggle his hands through the stage doorway to fire up the crowd a bit before returning.

All in all a pleasant, non-toxic afternoon, like alcohol-free champagne.