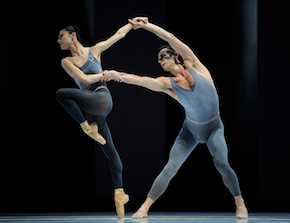 Flights of Imagination at S.F. Ballet

Liam Scarlett’s Hummingbird, which had its world premiere at the San Francisco Ballet Tuesday night, is almost shockingly wonderful. Scarlett, 28, the Royal Ballet’s artist in residence and until 2010 a member of its corps, set his newest creation to Philip Glass’ Tirol Concerto for Piano and Orchestra. Scarlett already has 19 ballets to his credit, and Hummingbird’s seamlessness, its ease, and innate humanity, makes it entirely possible that there’s more, lots more, where that came from. Let us hope.

The fluent juxtaposition of ballet’s classical vocabulary and Glass’ string-strong modernism seems totally organic, and there were a couple of moments, as the dancers moved upstage with wing-like arms, that were strongly reminiscent of Jerome Robbins’ masterwork Glass Pieces — which happens to be on the S.F. Ballet’s eighth and final program of the season. Incidentally, Hummingbird seems too cute a title, given the range of Scarlett’s flights of imagination.

The first of three principal couples, Frances Chung and Gennadi Nedvigin, explode onto the stage, moving down a small hill below John Macfarlane’s backdrop of blue/gray lines on white, later changing to gray/brown. The simple but elegant blue/gray costumes are also of his design; the moody, evocative lighting is by David Finn. Chung gave a forceful — even, for her, slightly brazen — performance with Nedvigin’s attentive partnership. The corps, sneaking onstage via the same little hill, added a sense of community play, with kicky jumps and adventurous pirouettes.

Yuan Yuan Tan, partnered by Luke Ingham, arrived, elegance personified in a dress of white, for a supple pas de deux. Ingham, a fine dancer, isn’t yet very emotive. The part is abstract, but conveying a sense of connection is important to the piece. Their duet culminated in a brilliant series of lifts and somersaults. It’s impossible to take one’s eyes off the sublimely leggy Tan. The soloists arrived, four of them, and the tempo intensified, with throw-lifts and wonderful leaps. Joan Boada and his partner Dores Andre, the third principal couple, increased the momentum.

The juxtaposition of groups and soloists — there’s also a corps of eight — and the inventive responses to the shifting dynamics made the piece seem far shorter than its 45 minutes. So did the virtuosity and sure-footedness of the dancers, each of whom shone as if Scarlett had created something just for him or her. In sense, he had. The audience stood up and roared as Scarlett took a somewhat bashful bow. Pianist Brenda Valhur played superbly, and Martin West conducted throughout the evening.

Artistic director Helgi Tomasson’s The Fifth Season looked wonderful as it opened the show Tuesday night. Frances Chung shone here as well, displaying daring and speed, partnered by Davit Karapetyan. This is a ballet whose classical sweep is augmented by neoclassical swoop, if you will, beautiful partnering and standout solos, and virtuosic pointe work, particularly the tiny swift bourrees of the opening section. In the eight years since its birth, The Fifth Season has acquired a new gorgeousness, warmly augmented the other night by Tan and Carlos Quenedit, as well as Sarah van Patten and her partner, Damian Smith, who’s retiring at the end of the season. He will be missed.

In an evening of terrific performances, the articulation and warmth of Sofiane Sylve in the Flute passage of Serge Lifar’s Suite en Blanc was particularly pleasing.