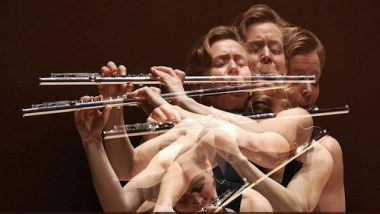 What do you do when you’re one of the world’s foremost performers on your chosen instrument, and you feel that there just isn’t enough great repertory for that instrument? If you’re Claire Chase, founder of the International Contemporary Ensemble (ICE), winner of a MacArthur Fellowship, and all-around fantastic flutist, the answer is obvious: you start a 22-year-long commissioning project that you call Density 2036, an allusion to Edgard Varèse’s groundbreaking flute solo, Density 21.5. The project will run through that year, the centenary of Density 21.5, and each year until then, Chase will commission and perform a complete program of new flute music.

On Saturday, Dec. 2, in an astonishing feat of concentration, musicianship, and sheer theatricality, she performed the first marathon concert of all of the commissions to date, plus some works written well before the project started. The concert, in five segments, took place over nearly six hours, with several 15-minute breaks and one of about forty minutes. On the program were 21 different works by 19 composers, covering a kaleidoscopic range of styles.

Only superlatives will do for Chase’s playing. Over the course of an extremely long program, she played with superb intonation, boundless technique, and complete control over the vast range of tone colors and effects that a modern flutist has in her arsenal, including key clicks, multiphonics, glissandos, harmonics, bent pitches, and microtones, all integrated seamlessly into the musical line. She sang and huffed into her flutes as needed, and when I say flutes, I mean piccolo, standard concert flute, alto flute, bass flute, contrabass flute, pan pipes, and perhaps a tin whistle. The contrabass flute, a recent addition to Chase’s family of instruments, is nicknamed Big Bertha and makes a rather amazing cello-like sound, besides being taller than Chase herself. She even managed to play multiple flutes at the same time, thanks to copious incorporation of prerecorded tracks and the work of sound designer Levy Lorenzo, who ran the electronic side while doing a spectacular job of keeping everything in sync and sounding great.

The works on the program weren’t uniformly successful, but the hit percentage was remarkably high. I might give Alvin Lucier’s piercing, extremely loud, and sometimes physically disturbing Almost New York a pass, or at least I’d wear earplugs for it. Philip Glass’s jolly Piece in the Shape of a Square, a very typical Glass work in which the performer is evidently instructed to arrange the music on stands in a square, outstays its welcome by perhaps 20 percent. The Famous Box Trick, by Francesca Verunelli, made all sorts of interesting sounds without providing much audible narrative.

But the best works on this program were as good as it gets. Of course Density 21.5, progenitor of so much 20th- and 21st-century flute music, was on the program, appearing once as a standard solo work and later as the musical accompaniment for a movement piece choreographed for Chase by Julie Beauvais.

Hearing Marcos Balter’s Pessoa for six bass flutes was, at times, like listening to an ocean full of whales. Yes, it might remind you of George Crumb’s Vox Balaenae, but there’s ever so much more to the piece than imitation or homage. And Balter’s PAN, a work-in-progress that closed the evening, will be a great and memorable work. It’s a hybrid musical-theatrical piece telling the story of the god Pan and featuring not only flutes and electronics, but an ensemble of community members directed by Chase. Its opening section, depicting Pan’s death at the hands of Apollo, is sonically wrenching, making a mighty contrast with the following section, in which Pan learns of his own musical powers. Chase and her volunteers performed about a half-hour of what’s expected to be a 90-minute piece, and I cannot wait to hear the whole thing.

Two other works on the program took advantage of Chase’s theatrical skills, Jason Eckardt’s haunting, and haunted, The Silenced, and the late Pauline Oliveros’s Intensity 20.15: Grace Chase. Eckardt calls The Silenced “a meditation on the those who are muted by force or by political, economic, or social circumstances, yet still struggle to be heard.” The piece has the haunting power of a ritual, with Chase playing to the audience in various poses, on the floor or standing, sometimes gasping or playing with a skittery, breathy tone. Intensity 20.15:Grace Chase is at the other end of the emotional spectrum, a manic, hilarious — and apparently fluteless — work that calls for Chase to recite possibly nonsense verse, throw balls, ride a skateboard, and more.

Pauchi Sasaki’s Gama XV: Piece for Two Speaker Dresses fell somewhere between these poles. The two performers — Sasaki with a violin and Chase with a flute — circle each other mysteriously, each wearing a dress covered with speakers and other electronics. The dresses modify the sounds produced by the performers’ instruments and also their bodies.

Felipe Lara, George Lewis, Matthias Pintscher, Du Yun, Dai Fujikura, Suzanne Farrin, and Tyshawn Sorey also had outstanding contributions on Saturday’s program, with composer/percussionist Sorey joining Chase for a duet. With Density 2036 off to such a tremendous start, I can’t wait for the future installations — although when 22 years of new music have accumulated, it’ll take a supermarathon on a weeks-long retreat to present it all.