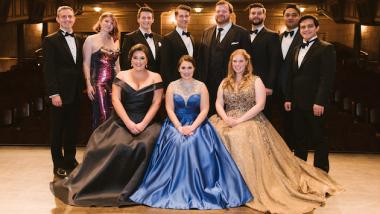 The Future Is Bright With S.F. Opera’s Adler Fellows

Passionate and impatient, the lovers couldn’t wait out the overture to rush into each other’s arms. When Sarah Cambidge and Kyle van Schoonhoven came together in a long kiss on the Herbst Theatre stage, it was an open question what desperate story the soprano and heldentenor were in.

The answer wouldn’t come until the end of the 2018 Adler Fellows concert of assorted arias and ensembles, presented by the San Francisco Opera Center, when Cambidge and van Schoonhoven found their musical destiny in the love duet, “Soll ich lauschen?”, from Wagner’s Tristan und Isolde. The kiss was replayed — and then some — by these two powerhouse singers.

But even that wasn’t a definitive answer. The intoxicating elixir of this annual program by young artists poised on the brink of operatic careers is how mobile and transmutable their talents already are. Well before the evening’s Wagner finale, Cambidge had already given a dynamic, lustrous account of an aria from Strauss’s Die Ägyptische Helena and pitched in on a Rossini chorus from Il Viaggio a Reims. Van Schoonhoven preceded his Tristan turn with a firm stretch from Parsifal and a stirringly patriotic encounter, from Verdi’s Atilla, with baritone Andrew Manea.

Variety and range were the defining virtues of the evening. The wonderfully supple and expressive countertenor Aryeh Nussbaum Cohen took on both Handel and Rossini with comparable assurance and aplomb. Bass-baritone Christian Pursell, displaying one of the most dramatically compelling voices, was as exciting in Rossini as he was in a Bellini duet, with Manea, from I Puritani. Tenor Amitai Pati’s light, lyrical tenor was as well suited to a familiar aria from Friedrich von Flotow’s Martha as it was to a caressing a Franz Lehár love song. Only a crooner’s voluptuous touch was missing from the latter.

The contrasts were apparent even when the same composer was involved. Soprano Natalie Image partnered twice with mezzo Ashley Dixon on Donizetti, to strikingly different ends. While coming on a little too strongly for the Herbst’s dimensions in the opening number, Image made an incisive Lucia, with Dixon as her companion, Alisa. Later on, the formidable Dixon took the trouser role of Aurelio, with Image as “his” wife, in the composer’s lesser known L’Assedio di Calais. The intervals they spun out together made this a harmonic showpiece.

With an attentive and responsive Christopher Franklin on the podium, the San Francisco Opera Orchestra provided stellar support for the singers. The program opened with a crisp account of the overture to Verdi’s Un Giorno di Regno. In the first of several bravura turns by the orchestral players, harpist Olga Ortenberg-Rakitchenkov summoned up Lucia’s liquid atmosphere. Minutes later César Cañón supplied the rippling harpsichord undertow for Cohen’s explicitly phrased, emotionally labile excerpt from Handel’s Admeto.

With the orchestra filling all but a narrow stage apron at the Herbst, the singers had to be resourceful in their acting effects. Only a bench on one side of the podium and table and chair on the other furnished the playing space. Director Aria Umezawa imaginatively expanded the cramped quarters with some heightened entrances and exits, including several through the house.

Dubbed “The Future is Now,” this Adler Fellows showcase held the sense of present excitement and anticipation that it routinely does. Both the musicianship and stage presence on offer are of a very high order. It’s impossible not to have favorites. Pursell’s exhilarating bass baritone, Cohen’s ethereal countertenor and Cambidge’s soaring and searing mezzo, especially in the Strauss, stood out for this listener. But that’s more a matter of transitory taste than judgment. On another night, another set of these splendid singers might have registered.

A huge measure of credit owes to the voice the audience heard first — that of San Francisco Opera Center director Sheri Greenawald, in her opening remarks. The shining success of the Adler Fellows program is how carefully chosen and solidly trained the participants all are. Clear proof of that poured forth in every number on the bill.