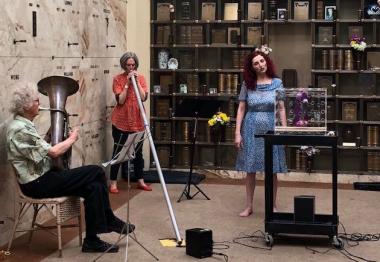 Standing inches from names engraved in a wall or facing a niche-lined columbarium containing photographs, relics, and the cherished remains of departed souls held in urns at Chapel of the Chimes in Oakland, a four-hour summer solstice concert, Garden of Memory 2018, is profoundly life-affirming.

Moments before being drenched in the polyrhythmic rainfall of the nine-member William Winant Percussion Group in the Chapel of Light, people streamed up and down narrow stairways like ants in an ant farm. Elbow-to-elbow in Chimes Chapel, pianist Adam Tendler’s “Trump is Over” t-shirt and sparkling delivery of a serene-to-stately-to agitated Le Loriot by  Olivier Messiaen caused a spectrum of comments. A Bay Area audience is diverse, individualistic, intensely curious, and prone to express audible opinions without reservation.

Architect Julia Morgan’s 1928 redesign and the contributions of other architects to the gardens, cloisters, alcoves, stair wells, fountains, and chapels in the expansive funeral home and columbarium are labyrinthine. Fueled by a keen hunger to experience new music from over 50 local and visiting artists during the walk-though, design-your-own concert in the historic landmark building, social awareness and strong legs are required. Or not, because a visitor in need of a wheelchair is quickly accommodated, elevators exist and on the first floor even in single locations, it’s possible to hear wide-ranging, eclectic programs.

The concert this year and held annually on every year’s longest day, June 21, finds it roots in pianist Sarah Cahill. Her wandering in search of public bathrooms in 1995 sparked an idea. Lost in body but not sonically cast in circles, Cahill recognized an organ playing in the distance and, long story short, proposed a concert to board members of New Music Bay Area. They agreed in 1996 (and the years since) to host and support tradition and risk-taking with the event’s new music, mixed media, and performance-art presentations.

Garden of Memory’s marvelous volunteers and physical surroundings notwithstanding, the evening’s most striking impression had to do with intangible awareness. Private, intimate moments in thought or in conversation with the amiable musicians contrasted with the noise-filled, celebratory communal experience. Ultimately, music was not so much a universal language as it was like air and the natural light that filled the spaces. Breathed individually, exhaled collectively, enlightened, there was sharing going on between friends, family, and strangers in the night’s glances, whispered comments, and applause.

Now to the music. Just some of it, because there’s an awful lot and anyone meandering from garden to high-ceilinged chapel to tiny vestibule was likely to miss performers.

All-female Eastern European vocal ensemble Kitka was up next in the chapel, but the Winant group beckoned. Bravely making the trek, lost long enough to hear a few notes from the Rova Saxophone Quartet, it was unclear: Were the jazz men simply warming up, or performing their seven-set improvisational work, NC17? Either way, a spontaneously witnessed excerpt was all-too-briefly enjoyed.

In the Chapel of Light, Jon Gibson’s work for the percussion ensemble defied its simple score during the west coast premiere of Thirties (30’s). Human nature craves a beat: The work’s pulse climbed to complexity, not so much in tempo but in density — until a unison ending brought the musicians to finish line 30 abruptly, as if all sound had been sucked into a vacuum.

Down the stairs once again, violinist Kristina Dutton and vocalist/pianist Majel Connery who together form the composer-performer duo, Hae Voces, filled the Chapel of Tenderness with haunting vocals and gorgeous instrumentation. Expanded electronically, they created the impression of a full choir and chamber string ensemble. Dutton’s cross-weaving lines served to balance and add verticality to Connery’s more level, vocal platform. With the low burble of a nearby fountain as third counterpoint, passersby stopped, hushed, perhaps awed by the voluminous, luminous sound generated by only two performers.

What do the spirits of people behind the walls, let alone the live visitors, think of the wondrous music that occurs once a year? It was a silly thought, but enjoyable as it was a rare thought and one not previously had in a traditional concert hall.

Two more must-mentions before signing off: Robin Petrie performing on hammered dulcimer took time to demonstrate the technique used to create the instrument’s glistening, broken chord arpeggios, how using fingernails results in a more harp-like sound and the various Celtic, Balkan, Swedish, American Folk, and other influences on her original compositions. I stood close enough to touch Petrie and her dulcimer, and her physicality ranged from light to bold, each wrist flick unique and deliberate. During the impromptu tutorial, it was clear she knew every centimeter of each string and how it might sound at that particular moment, if hit in a precise way and heard in a specific location. Launching into a work, all heady information was jettisoned by sheer enjoyment. When was the last time 40 people smiled in unison? It happened then and there.

Similarly, Paul Dresher and Joel Davel impressed a packed crowd of listeners while playing the hurdy grande and marimba lumina. The two invented instruments — the former a medieval European folk guitar-like gizmo stretched 10 feet long and set horizontally on a spinning wheel, the latter an electric marimba whose bars when hit by mallets allow for pitch, volume, and timbre modulation — were visually fascinating. With a bass groove, upper range sounds that brought to mind vocal yips, sirens, slide guitar, majestic organs, and more; it was like hearing the world being created. A fingers-and-knuckles percussive solo on the hurdy grande’s exterior finished the piece — or so it seemed until the strings resumed their drone and set everyone off on another journey.

I reluctantly tore myself away as Pamela Z’s spellbinding voice was audible from a distance, and took comfort in thoughts of next year, when on June 21 there’s another opportunity to celebrate the magic of music-making and the summer solstice.