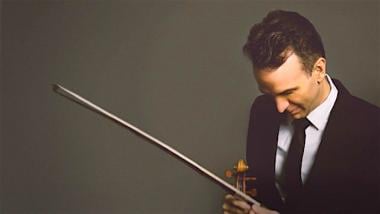 Three years ago, when I last heard Gil Shaham play Bach’s E Major Partita, it was a glorious victory, the final push in a marathon performance of the entire cycle of six solo works for violin.

On Monday, this partita was the lone Bach work in a mixed recital program, with pianist Akira Eguchi at Cal’s Zellerbach Hall. Even without the buildup, though, it felt like a magnificent win.

Bach’s dance movements can and are played in as many ways as there are violinists. I was taught to play the Loure as if going to my own funeral, reluctantly dragging each bow into the next. Actually, the Loure was originally a kind of moderate gigue, accompanied by instruments like the bagpipe (which, in fact, is the meaning of the French word). Considering this history, Shaham’s playing, lively and even a little rowdy, feels like the most natural way. The pickup notes arc in such a way that the music swings forward, the florid ornaments like additional bursts of speed. The sound is silky and pure, yet also vibrates continuously and never becomes too reverential.

In this way, Shaham’s playing melds baroque period elements with the 20th-century ideals many of us grew up with. Yet the overall effect isn’t moderate: it’s vital.

Every time I watch Shaham, I’m struck especially by his fluidity, a quality that has astonishingly good effects on practically everything he plays. The César Franck Violin Sonata, too, can sound convincing in a number of ways, but Monday’s performance, to me, demonstrated the ideal. With fluency, he and Eguchi moved the second movement’s Allegro molto right along, saving most of the drama for the fantasia recitative, which newly emerged as the work’s dramatic core.

The same gracefulness characterized Fritz Kreisler’s Praeludium and Allegro, a work I was thrilled to see on the program. It’s one of Kreisler’s most substantial vignettes, yet I’ve never heard it played in recital. (Today’s young technicians more often play harder works by composers like Eugène Ysaÿe and Henryk Wieniawski.) On Monday, the bell-like tones of the introduction, in particular, had an easy dignity.

Along with these old favorites, Monday’s concert included two works more recent, if not exactly new.

Scott Wheeler’s fleeting Sonata No. 2, The Singing Turk, flits about familiar idioms — and then takes some surprising turns. One passage in the finale’s perpetual motion sounds impressionistic, another straight out of John Adams’s Road Movies. Gentle rhythmic currents blend post-minimalism with American pastoralism (Barber, Copland) in the conversational first movement. In fact, Wheeler uses as points of departure different Turkish characters as they’re depicted in European operas. I occasionally hear fragments of the late classical style, but the music moves too quickly for me to catch very much.

The language borrows frequently, and the effect is often topsy-turvy, yet the music always draws me in — and therein lies the power of the Shaham-Eguchi duo, whose collective tone is a like a binding ingredient that pulls the whole thing into cohesion.

Familiar gestures, this time of Jewish music, contribute in a big way to Avner Dorman’s Sonata No. 3, Nigunim. Here, the novel is more effective. In a scherzo that sometimes sounds derivative, fresh intervallic patterns (sequences of diminished and augmented octaves) build to comic extremes. It’s remarkable, too, when these same harmonies assume a yearning quality in the following movement, an abstract meditation of great intensity. Dorman mixes in non-Jewish idioms throughout, and the frenzied, crawling clusters in the finale draw from Macedonian dances, ones I’d very much like to get to know.

Violinist Gil Shaham: For the Love of Concertos

About to visit the Bay Area for a recital, Gil Shaham talks about new works he’ll perform and an unusual flowering of violin concertos in the 1930s.