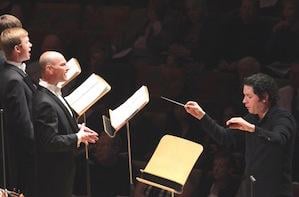 John Adams has written a long, arduous and mostly extraordinary new oratorio titled The Gospel According to the Other Mary. Conductor Gustavo Dudamel, a strong advocate of the composer, and the Los Angeles Philharmonic, which commissioned the score, are giving the work its world premiere performances at Walt Disney Concert Hall as the finale to their 2011-2012 season. The auditorium was well filled Friday night before intermission; not so much after it.

The work ostensibly recounts the story of the crucifixion and resurrection of Jesus, with the death and revival of Lazarus as substantial prelude to it. The “other Mary” of the title is Mary Magdalene and she becomes the central figure; we see the story from her point of view, but she is also a focus of it. Peter Sellars, Adams’ frequent collaborator, cobbled the libretto from a wide range of sources, including the Old and New Testaments, and texts and poetry by Dorothy Day, Louise Erdrich, Primo Levi, Rosario Castellanos, June Jordan, Hildegard von Bingen, and Rubén Dario — and there’s the rub.

Composer and librettist decided to set the story in a time that they call the “eternal present.” It opens with Mary singing, “The next day in the city jail we were searched for drugs.” An addict in the next cell has lost her mind. Back and forth we jump throughout the evening, from Biblical texts to modern, with Mary in particular becoming some sort of manic feminist/victim. It’s hard to know what to make of her as she pops up and tells us about an apparent suicide attempt, or her religious doubts or tortured psyche. Martha, her sister, goes picketing in the vineyards, meets with César Chavez and the Teamsters, confronts the police and can “describe the several kinds of body lice.” You see what Adams and Sellars are artfully up to without quite getting the point.

But mostly these interpolations impede dramatic progress. At two hours and 30 minutes (not including intermission), The Gospel According to the Other Mary becomes a rather grueling evening of music, despite, or maybe even because of, the challenging brilliance of Adams’ creation. It’s a big meal with a surfeit of calories and part of the way through you begin to feel that perhaps less would have been more. Given here in oratorio form, Mary will be staged next year by Sellars, at which time its dramatic thrust will have to be reassessed.

The music is teeming and fascinating, maximalist rather than minimalist. Adams’ current style is hyper-fractured — we hear syncopations upon syncopations (the musicians were glued to their scores), harmonies atop harmonies, multiple layers of discourse at once. The harmonic language of Mary is freely dissonant, but plain tonal chords and soothing consonance are never far away, often even lurking amid the thorns. The rhythmic idiom could be called dissonant too, cluttered and battling. There’s very little of the old churning and whirring of the younger Adams in Mary, though there is a good deal of magical floating, music unhinged from meter and gravity that swirls before our ears like wind chimes in a gentle breeze.

The singers — Mary, a mezzo-soprano Martha, a contralto Lazarus, a tenor, a trio of countertenors who narrate (as in “El Nino”), and chorus — limn angular, wide-ranging lines that nevertheless eschew any floridity. Adams strictly metes a single note per syllable, emotive emphasis coming from the repeating of phrases or scraps of phrases.

Bach’s oratorios are a clear influence here. The piece unwinds in numbers, each of which is given its own set of motifs and sonorities, each a little static package unto itself. There are many extraordinary moments, including the death of Lazarus and three days in the tomb of Jesus (both evoked by otherworldly instrumentals), and too many arias to mention. Lazarus’ da capo aria, “Tell me: how is this night,” was certainly a standout, though.

The orchestration, for a moderately sized ensemble, includes prominent parts for cimbalom, electric bass and a vast array of percussion, including tuned gongs and an almglocken. Striking colors are never long absent.

In the middle of it all stood Dudamel, taking care of business in a mostly business-like fashion, studiously cueing and quietly alerting. It was a testament to his work that you barely noticed him even as the music did its considerable thing, sounding like a million bucks as it did so.

Dudamel Comes Into Focus With His L.A. Philharmonic