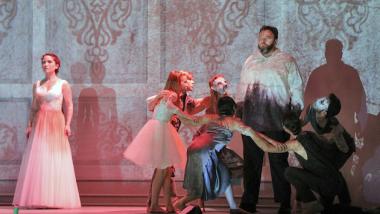 Performances of Mahler’s works have been among the glories of Michael Tilson Thomas’ tenure as music director of the San Francisco Symphony, and so have semistaged productions of operas and musicals, from Wagner and Rimsky-Korsakov to Bernstein. Even Beethoven's Missa Solemnis received a staging that richly enhanced that work's ample musical drama. Why not put these two streams together with a semistaged production of the Mahler’s early cantata, Das klagende Lied? For myriad reasons, this week’s attempt, directed by the talented James Darrah and with a starry cast of singers, failed to persuade this listener that, in the end, it was a good idea.

MTT himself, the four solo singers, and the Symphony Chorus all did their best, faced with a work that isn’t an obvious candidate for staging and a staging that didn’t add much value to the work.

Let’s start with the work itself. Mahler wrote Das klagende Lied between the ages of 18 and 20, and it has all the faults and charms you would expect from this particular budding genius. Orchestrated with the assurance and skill of a far more experienced composer, it’s wildly eclectic, with changes of tone and style coming at you every few minutes. Have a hankering for bit of brass choir from Parsifal, a Bachian hymn, some Flying Dutchman, and, with a flash of Dies irae, an invocation of Berlioz’ “March to the Scaffold”? It’s all there waiting for you. If, say, the name Raff were attached to this piece, rather than that of Mahler, nobody would hesitate to call it second-rate kitsch. Knowing what would come later and how the composer’s stylistic tendencies would work out, we can see the deep promise in Das klagende Lied.

The composer wrote the poems, as he did for several of his own works. The story starts, Turandot-like, with a challenge from a cold-hearted queen, who promises to marry the man who can bring her a particular woodland flower. Two brothers seek the flower, and after the younger finds it, the elder kills him and claims the hand of the queen. A minstrel finds the dead brother’s bones and makes a flute from one of them. When he plays it, the voice of the dead brother tells him what happened. He takes the flute to the wedding, where the flute again reveals the truth. The queen falls in a faint, the wedding guests run off, and the castle walls collapse.

This fairy tale could be set to music successfully, but Mahler’s poems are largely narrative, with almost no dialog. That’s why he was right to set this as a cantata: the poem just doesn’t have the kind of dramatic thrust that a staged work calls for. There’s not enough dialog or action to hang your blocking on, and much of the text is sung by the chorus rather than by the individual singers. What do you do when there are three men and one woman in the poem, while there were two male and two female singers?

This staging fails to mitigate these problems. Darrah added four dancers and two nondancing, nonsinging children to the four singers, meaning that he had to invent action for ten participants rather than just four. This does mean that he avoids literally acting out the story, but what he puts in place isn’t very interesting or dramatic. For example, at the opening of the piece, one of the singers sits on a chair and seems to be reading a story to the children. Throughout, the singers appear to address themselves to the dancers, and sometimes interact with them. But despite the availability of projections, we get nothing to emphasize some of the most dramatic moments, such as the collapse of the castle or the flute taking charge of the story.

The stage itself looked pretty enough, with handsome projections on a flat at the back of the stage and the singers changing into a variety of costumes during the hour-long presentation.

One can’t fault MTT’s well-paced — and dramatic — performance or that of any of the singers. The chorus led with robust, yet transparent, tone. Soprano Joélle Harvey sang with crystalline tone and graceful line. She more or less split the part of the icy Queen with mezzo Sasha Cooke, who sang with her usual personal warmth and beautiful sound. Tenor Michael König and baritone Brian Mulligan, both burly, big, bearded men, might have been chosen as much for their resemblance as for their singing, considering that the baritone part is tiny. Both sang splendidly and sounded rather alike as well as looking alike.

The concert opened with a sighing performance of Mahler’s moody, ominous symphonic movement Blumine, the highlights of which were gorgeous solos by principal trumpet Mark Inouye and principal oboe Eugene Izotov.

The song cycle Lieder eines fahrenden Gesellen (Songs of a Wayfarer), the major work on the first half of the program, received a puzzling performance from Sasha Cooke. She sounded glorious, with her wonderfully rounded and even tone, but she was emotionally far too placid. The very roundness of the singer’s sound muffled her consonants, so that the text lacked rhythmic incisiveness. During “Ich hab’ ein glühend Messer,” she did not project much of the desperation that should come with having a burning knife in her breast, nor the quiet despair of much of the cycle.