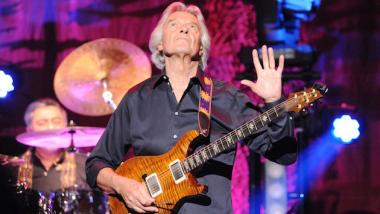 We know all about so-called “farewell tours” that turn out to be false alarms when performers ultimately can’t bear to leave the spotlight. Yet John McLaughlin’s marathon concert Saturday night at UCLA’s Center for the Art of Performance at Royce Hall had what felt like a genuinely historic stamp of finality about it.

The 75-year-old English guitarist (now a resident of Monaco) has said that his The Meeting Of The Spirits tour would be his last in North America, and the concert at Royce — where he played way back in 1974 — was the last stop. Fellow guitar-slinger Jimmy Herring, one of the few McLaughlin acolytes capable of dueling mano-a-mano with the master, shared the bill.

And the concert turned out to be a lingering farewell — nearly four hours of variations on the jazz-rock legacy of the Mahavishnu Orchestra, the band that made McLaughlin a guitar hero in the jazz and rock worlds. To recall that legacy, McLaughlin even had a beautiful, ice-blue, double-necked electric guitar custom-made for him by Paul Reed Smith for the tour, to be auctioned off afterwards to benefit those who are healing traumatized people in Palestine with music.

Building upon the breakthroughs of the Miles Davis and Tony Williams electric bands and rock’s Jimi Hendrix, the two editions of the Mahavishnu Orchestra established jazz-rock’s vocabulary from 1971 through 1975 — slow arpeggiated themes, tightly-wound rapid-fire unison lines, complex drumming, extended jams at the highest possible speed and volume. In retrospect, burnout was inevitable. By 1975, the restless McLaughlin had broken up the band and headed in other musical directions, occasionally reviving the Mahavishnu format with greater refinement if lower levels of intensity.

Jimmy Herring’s Invisible Whip — a five-piece band with the instrumentation of the first Mahavishnu Orchestra (guitar, violin, keyboards, bass, drums) — opened the night by whipping through a propulsive set that affectionately began with a Miles Davis number (from Bitches Brew) whose title happens to be “John McLaughlin.”

McLaughlin’s 4th Dimension quartet followed with a set that pretty much reflected the less-frenetic, often more lyrical post-Mahavishnu textures in which McLaughlin has been trading when he ventures into jazz-rock. Looking as debonair as ever with his leonine mane of silver hair, McLaughlin peeled off the rapidest of lines with a relaxed effortlessness, the inflections more varied and subtle now than when he was younger. There is a more European sensibility in his playing now that can be felt more than described, and keyboardist Gary Husband was a virtual match for him in style as they traded licks. There was some Mahavishnu material in this set but mostly there were newer things like 2006’s “New Blues Old Bruise” and a recent homage with Spanish-flavored chord progressions to his late sparring partner Paco de Lucia, “El Hombre Que Sabia.”

Finally, the McLaughlin and Herring bands formed a gigantic nonet and performed a third set where for the first time in a long time, McLaughlin revisited material from Mahavishnu’s prime-time albums, The Inner Mounting Flame, Birds Of Fire, Between Nothingness and Eternity, and Visions of the Emerald Beyond — omitting the best album of all, the collaboration with Michael Tilson Thomas and the London Symphony, Apocalypse. Wielding his new guitar, McLaughlin sounded the arpeggiated themes on the 12-string neck and soloed furiously on the 6-string neck while Herring kept pace, at one point quoting Ornette Coleman. The textures of the bands together were heavier, less mobile, and yet more majestic than when they played separately, easily handling even the trickiest Mahavishnu passages.

Late into the night, some fatigue began to set in for this listener, but that’s forgivable. It was, after all, the last set of the last concert of the last tour; hardly anyone in the transfixed audience left their seats, and the bands wanted to keep on burning. And even when everyone took their final bows as the clock neared midnight, they couldn’t let it go yet; they came back for another 12 minutes of high-energy Mahavishnu music. It’s hard to say goodbye.

The Wizard of Six-String, guitarist John McLaughlin, is coming to Cal Performances this weekend and that's cause for joy for all music lovers.