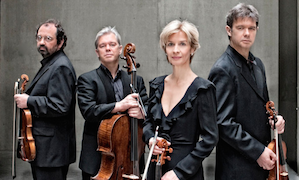 Hagen Quartet Has Its Day in San Francisco

Austria's Hagen Quartet visited San Francisco this week, and arrived with a big reputation, including a quotation in their publicity materials calling them "undoubtedly the world's most famous string quartet." They don't appear in the United States very often, and this reputation is surely based primarily on their 40-odd recordings of much of the central quartet repertory. The majority of the audience at their November 1 performance presented by San Francisco Performances evidently found them thrilling, giving the quartet a standing ovation at the conclusion. But while the performances were perfectly decent, they had little individuality and not much to distinguish them from the top-notch work being done by many other groups in today's quartet-rich world.

Founded by four siblings in 1981, their current lineup consists of Lukas Hagen, first violin, Rainer Schmidt, second violin, Veronika Hagen, viola, and Clemens Hagen, cello. By and large, their sound is warm and solid, with Veronika Hagen's oaken viola tone especially lovely in her solo passages. It's Lukas Hagen who seems sonically and technically not as one with the other three voices. His sound is leaner and brighter than those of Schmidt and his siblings, and occasionally his intonation in fast passages suffered in comparison to the others'.

Their program covered a wide stylistic range, including quartets by Mozart, Brahms, and Shostakovich. The latter's Quartet No. 8 in C Minor, Op. 110, received the most successful performance of the three. Written in 1960 during a wrenching visit to the ruins of Dresden, which was severely damaged by Allied bombing late in World War II, this quartet quotes freely from Shostakovich's earlier works, and much of the remaining thematic material comes from a musical fragment derived from Shostakovich's name. Like many of Shostakovich's quartets, then, it is deeply personal and dogged by both exterior and interior events.

The Hagen played the five-movement quartet with wrenching intensity, the third movement ghostly and almost disembodied, the second all buzzing fury. In the fourth movement, they somehow managed to sound like a small string orchestra rather than a quartet, and the haunted first movement was marvelously sustained.

The opening Mozart, K. 387 in G Major, received a solid, stylistically unremarkable, performance. Clemens Hagen's third movement cello solo was, perhaps, the greatest highlight. The off-beat accents of the second movement make it sound rather like an outtake from the composer's Musical Joke, K. 522, and the quartet could surely have made more of its quirky humor. Similarly, the closing Brahms quartet, in B-flat Major, Op. 67, had some welcome impulsivity in the first movement, and a fabulous viola solo in the last movement, but would have been more memorable with more personality, more portamento, and perhaps a bit more Viennese schmaltz.