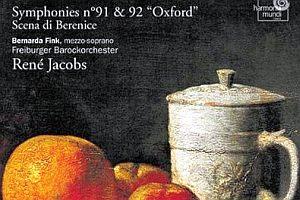 Lisa Hirsch on June 15, 2009
Over the last couple of decades, René Jacobs has assembled a catalog of recordings as a conductor, a major change from his earlier career as a famed countertenor. The bicentennial of Franz Josef Haydn’s death brings a happy pairing of composer and conductor, on a Harmonia Mundi disc featuring the symphonies No. 91 in E-flat Major and No. 92 in G Major, as well as a bravura performance of the dramatic “Scena di Berenice” by mezzo-soprano Bernarda Fink.

This brilliant recording has all the hallmarks of Jacobs’ highly regarded Mozart opera recordings: vigorous rhythmic drive in the faster movements, finely sculpted articulation and string attack, wonderfully expressive dynamics that support both local phrasing and the larger shape of each movement, humor that’s sometimes sly and sometimes boisterous. Jacobs’ Haydn isn’t the genial Papa Haydn of children’s music books, but a complex and formidable human who produced the immense variety to be found in his more than 100 symphonies.

Jacobs doesn’t do this all by himself, of course. I’m particularly struck by the beautiful sound of the period-instrument Freiburg Baroque Orchestra. The string instruments, strung with gut and played with minimal vibrato, make a marvelously transparent sound, leaner and a bit more astringent than those in a modern orchestra. The wooden flutes sing sweetly, their tone rounder and less penetrating than today’s silver instruments. And unlike the period-instrument orchestras of 25 years ago, the members of the Freiburg Baroque play with the same excellent intonation as their counterparts in modern orchestras.

Haydn’s operas, considered to be weakly structured, are rarely performed. The “Scena di Berenice” demonstrates that, at least over the length of a short scene, the composer could write dramatically effective music. Bernarda Fink brings a warmly expressive mezzo-soprano and a sure sense of pacing and phrasing to the scene, in which the desperate Berenice is driven nearly to distraction by the death of her lover Demetrius.