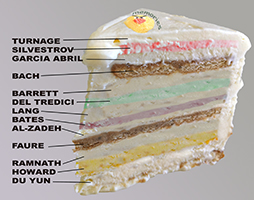 If an encore is frosting on the cake, what is an entire concert of encores? Indeed, if Hilary Hahn is doing the concert, it’s some of the cakiest frosting you’ll ever experience.

A decade ago, the top-tier violinist began a quest to commission short encore works from recognized composers, and eventually ended up with 26 of them. In two sets of concert tours, each premiering half of the commissions, Hahn is acquainting the world with the fruits of her initiative. Saturday evening, Hahn ingratiated patrons in Herbst Theatre with the second set, along with two repertory staples, under the auspices of San Francisco Performances.

The process of listening to Hahn’s “encores” is fascinating. Many are more like concise sonatas than bagatelles. The focus required for a listener to properly appreciate them in their time frame can make “normal” pieces seem overstuffed in comparison. This effect was most notable in Gabriel Fauré’s Sonata No. 1 in A Major, Op. 13: I felt as if I was in a hot bathtub of luxuriant sound too long, and my skin was wrinkling — despite a superb rendition by Hahn and her able accompanist, Cory Smythe.

Hahn’s interpretation of this masterpiece and her technical mastery wowed the audience.

The encores represented a fair survey of what’s going on in music today, from more old-fashioned modernist and minimalist gestures (Richard Barrett’s Shade and David Lang’s Light Moving, respectively) to Mark Anthony Turnage’s Hilary’s Hoedown, with its infusion of popular and regional music styles. Almost every one of them was appealing (or, if less so, they were over soon).

Two of the 11 encore works on the program were outstanding: Antón García Abril’s First Sigh and Du Yun’s When a Tiger Meets a Rosa Rugosa. García Abril is one of Spain’s most respected senior composers, and has the unique distinction of living in a home designed by an even more internationally famous individual, his duplicately named son, the architect Antón García Abril. The encore not only is well-structured, as you might guess, but also contains some exquisite harmonies juxtaposing major and minor tonalities, along with whiffs of dance motifs.

Du Yun’s encore was the longest of the set, at 7 minutes. It begins with a Chinese-sounding pentatonic melody, but then morphs into other worlds, some frantic (the tiger?), others highly expressive and romantic (the rose?).

Appropriately, all the encores gave Hahn a chance to shine on her own with technical challenges, but none of these was empty rhetoric. I’d rather hear these numbers than any cadenza from a concerto.

Of the other compositions, which included works by James Newton-Howard, Kala Ramnath, Franghiz Alli-Azdeh, Mason Bates, and Valentin Silvestrov (details in another review), I had the most fun imagining David Del Tredici possibly struggling to write his encore: His pieces seem to always last three times longer than necessary. Given Hahn’s stricture, he came up with his usual hyper-romantic stuff, a wrenching cross between Brahms’ “Lullaby” and Mahler’s “Adagietto” from the Fifth Symphony, but for once it was just as long as it needed to be, and quite enjoyable.

All the encores gave Hahn a chance to shine on her own with technical challenges.

Of course, after an enthusiastic reception to the program at its conclusion, there had to be an encore to the encores. Hahn picked her prizewinner, the 27th encore: one picked from hundreds submitted in a contest she organized. This was the accent-rich Angry Birds of Kauai, by Jeff Myers. A second encore was performed as a bonus, Miciru Oshima’s Memories, a passionate number with a nice melody, the beginning of which reminded me of Henry Mancini’s theme for the heartthrob film Love Story.

All the pieces were memorized except for Lang’s, which was so repetitive that Hahn had to put on glasses to track the arpeggiations on her sheet music. Hats off to her for sponsoring some fine contemporary contributions to a neglected repertoire. A lot of work, and certainly no cakewalk!