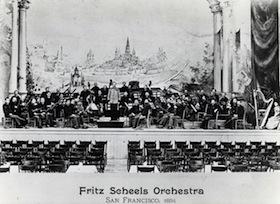 In this centennial year of the San Francisco Symphony, whose history is narrated so well by Larry Rothe's Music for a City, Music for the World, there is now another welcome chronicle. Just published this week by the University of California Press, Leta E. Miller's Music and Politics in San Francisco has an even broader scope, dealing with the city's history of classical music focused within four amazingly busy decades, but touching upon both the antecedents and what followed.

In the period defined by the book's subtitle, "From the 1906 Quake to the Second World War," Miller goes far beyond the subject of the orchestra, placing it in the sociological context of San Francisco, analyzing such diverse topics as the politics of class, race, labor, activities of an opera-mad city, the Federal Music Project, and much more.

Miller is a professor of music at UC Santa Cruz and the author of numerous studies, including two major musical biographies of Lou Harrison, coauthored with fellow faculty member Fredric Lieberman.

Few histories or musicological studies provide as lively and entertaining reading as Music and Politics. Years of extensive research — through interviews, newspapers, archives — resulted in a mother lode of data, but the marvel of Miller's book is how she makes all that information coalesce in a colorful, memorable narrative. Besides many "scoops" of hitherto unknown or little facts, and impressive scholarly exposition, Miller offers quirky connections such as those between music and Chinatown, Henry Hadley, Henry Cowell, Harry Partch, Ernest Bloch, and Lou Harrison.

Tracing the rich history of Chinese opera in San Francisco, headquartered for a time in the Mandarin theater, Miller documents not only the attendance of those five composers, but illustrates the effect of the experience with score excerpts from Bloch's Four Episodes and Hadley's San Francisco (written years after his "uncomfortable dismissal" as SFS music director in 1915).

Some of Miller's discoveries have already been mentioned in SFCV. The book's scholarly attributes are impeccable. Of its 365 pages, 86 are devoted to footnotes. references, and an unusually complete and helpful index.

Chapter headings only give a glimpse into the purview of the book:

The concluding Aftermath chapter carries to a logical conclusion the entire book's mien of telling a story, the whole story actually, with obvious affection for the city, but no flag-waving whatsoever.

Following the subject to the present, Miller notes that many talented musicians still leave the city for training on the East Coast, that "local compositional aesthetic" may not be fully realized, that the Conservatory "has never achieved the renown of similar institutions in the East," but that the often criticized "stylistic eclecticism," the "embrace of dissimilarity," still result in "ultimate victory of the utopian over the divisive."

Despite the city's changed demographics and politics (formerly a haven of conservatism, San Francisco now stands as one of the most liberal communities in the nation), the institutions founded during the time covered in this book have not died out but continue to form a vital part of the city's cultural fabric. Its symphony, opera, and ballet rank among the country's most respected.