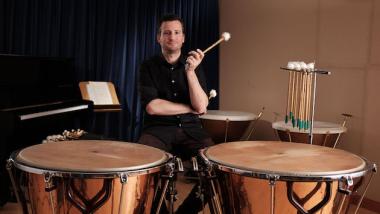 Just as there are stereotypes about the people who make up the different sections of the orchestra, there are stereotypes about music and the people who write it. Brass players write large and loud, string players write colors and quiet, and upon learning that the Los Angeles Philharmonic’s Principal Timpanist Joseph Pereira is also a composer, one might guess that his music sounds like 21st-century Edgar Varèse.

The beauty of Pereira’s writing in Glimpse, the quintet that received its world premiere by the San Francisco Contemporary Music Players on October 8, is that it is decidedly nonpercussive in material (there’s no knocking on the sides of instruments, for example) — yet it is, unmistakably, music by a percussionist, a performer whose very entrances almost always stick out. Every sound matters in Glimpse, which formed a dynamic opening to SFCMP’s first performance of the season, at the Veterans Building’s Taube Atrium Theater.

Over eight short movements, Glimpse plays with notions of how instruments — winds (Tod Brody, alto flute and Peter Josheff, bass clarinet), strings (Susan Freier, violin and Stephen Harrison, cello), and piano (Kate Campbell) — sound. In the static opening movements, the piano rumbles in its murky low range, strings play semipitched flautando bows, winds tonelessly tap their keys. Then, material becomes active. Strings scrub their bows up and down the fingerboard, bow on the side of the bridge and with overpressure; the piano dampens its strings. Featured pitches emerge amidst a sea of trills, scuttling lines, and dynamic swells. There may be no knocking, but very few sounds go unexplored.

These are very fine miniatures, but in fact, the best new work on Saturday’s program was the largest in scale: Anna Thorvaldsdottir’s In the Light of Air (2013), for viola (Freier), cello, piano, harp (Karen Gottlieb), percussion (Nick Woodbury), and fixed electronics (Jeremy Wagner).

Thorvaldsdottir’s instrumental and harmonic writing is much more conventional than Pereira’s — there are plenty of tonal chords here — but Into the Light of Air is uniquely compelling for its completeness of vision: Thorvaldsdottir thoroughly immerses the listener in an ambient yet intricately detailed soundscape.

In darkness, fixed electronics establish an atmospheric background texture, in and out of which gestures — harp glissandi on single strings, strikes on metal percussion instruments — weave. Structural elements morph slowly over the four meditative movements, largely anchored by pulsating Cs, but pops of color are aplenty: cascading harp and piano lines in the second movement, “Serenity,” lyrical amplified doublestops and arpeggios in the third movement, “Existence.”

Review of In the Light of Air

The music is wonderful to listen to, and even more rewarding to watch. In the Light of Air needs no props, but in Saturday’s performance, magnificent yet tasteful lighting design by David Coll — which included a glowing backdrop and lamps that pulsed to illuminate instruments playing featured lines — made Thorvaldsdottir’s world feel even more complete.

Ken Ueno’s Sawdust on Ararat (2016), on the other hand, was uneven. The busy, rhythmically complex septet features an oboe soloist (Claire Brazeau), who stands above a snare drum that acts as a resonator. The resulting combination forms a “hacked” instrument, which, as Robert Kirzinger describes, “at once retains the history of the instrument as well as the distorted potential of a new, undiscovered territory.” With ideas like these, it’s easy to see why SFCMP has long championed Ueno’s works.

But in performance, the effect of the hacked instrument was hardly pronounced — as was a lighting effect involving cell phones shone at the audience. Gentle rushing sounds, created by percussionists Woodbury and Loren Mach sawing on wood, were delightful. Their blocks’ eventual splitting — the clattering signaling the end of the piece — was only predictable.

On this lengthy program the inclusion of Toru Takemitsu’s Toward the Sea felt superfluous — but the performance, by Brody (alto flute) and David Tanenbaum (guitar), was refreshingly languid.