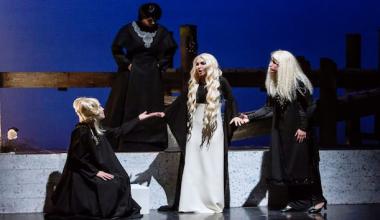 Iolanta Soars Above an Earthbound Boris

It was well worth the wait.

After starting 20 minutes late and plowing through four earnest but stodgy scenes from Boris Godunov, New Opera NYC made their visit to Fort Mason’s Cowell Theater pay off big time on Friday’s opening night, turning Tchaikovsky’s one-act opera Iolanta into the musical equivalent of a highlight reel. With the clarion soprano Julia Lima in the title role of a blind woman whose father has kept her unaware of her own unsighted state and the exciting tenor Viktor Antipenko as her besotted suitor and sturdy baritone Patrick McNally as a prince reluctantly betrothed to her, the potency of young love surged forth.

Antipenko was especially fine, pushing his lyrical, athletic tone to the limits and playing the role of the love-driven Vaudémont with charismatic conviction. He was so persuasive, in fact, that the mouth-filling Russian of brother Modest Tchaikovsky’s libretto, based on a play by the Danish writer Henrik Hertz, seemed to melt into a liquidly flowing Italian in the tenor’s voice. His dirty-blond locks and decisive stage presence added to the matinee-idol allure. Friday’s modestly sized audience made a big sound in their ovations for him.

Iolanta, which has undergone a kind of rediscovery in recent years — the Metropolitan Opera paired it with Bartók’s Bluebeard’s Castle in 2015 — is a compelling curiosity. The score delivers a series of choice arias and ensembles, but also turns drippy and unctuous at times. The story is both bizarre and psychologically powerful, as the young heroine discovers love and vision at the same time. Both pose disorienting and frightening possibilities, effectively realized as music drama.

Lima’s acting was a little precious and studied, but her girlish clear tone ripened into something more complex as she came out of the darkness. In addition to the other firmly grounded principals, the supporting cast did solid work. Maria Kaganskaya was focused as Iolanta’s caretaker, Marta. Gennadiy Vysotskiy added a welcome comic presence as her boozy husband, Bertrand. Kiril Havezov sang the small role of the Moorish doctor who restores Iolanta’s sight with grave sobriety.

Not everything came off smoothly. The black-and-white sets, in Igor Konyukhov’s production, were both flimsy and reductively emblematic. A number of women, including the lead, looked faintly ridiculous with their Warhol-esque white hairdos and color-free costumes. A group of children stood around awkwardly. The supertitles went out of sync several times.

But by the time Lima and Antipenko sent their late love duet soaring into a ravishing full-company ensemble, Iolanta had made its case and then some. Musically and dramatically, this late Tchaikovsky work transcended its own excesses in a moving, even thrilling climax.

It was all in stark contrast to the dramatic and theatrical austerities of the Boris Godunov selections. Broken into disjointed pieces, the story of the brooding Tsar’s personal and political crises lacked a dramatic sense of purpose and coherence. (To be fair, those problems are also endemic to the entire opera, which exists in several performing versions and is often edited and reconfigured.) The direction ran to static tableaux, on a set of wooden ramps and platforms that reduced Konyukhov’s direction to traffic control.

Svetlov’s performance as Boris — and in one scene as the itinerant monk Varlaam — dominated the proceedings. Singing in a richly granular voice, he projected a tragic majesty in the opening scene, towering over his subjects at the time of his coronation. By the last selection of the evening, he was a broken man, sobbing to his young son before staggering up a ramp to die in a birch forest (distractingly constructed mid-scene). In between, he registered the haunting presence of a rival and brought a rough-hewn charisma to the role of Varlaam.

The orchestra, especially the woodwinds, gave the Mussorgsky a melancholy tenderness and clamorous urgency, as needed. Dmitry Gishpling-Chernov had some vital moments in a pair of roles. Lazo Mihajlovich gave the role of a cautionary monk a grizzled, ruefully sonorous authority.

But the Boris passages remained largely earthbound. It was left to Tchaikovsky’s blind innocent and the men swirling around her to lift this New Opera NYC night at the Cowell skyward.