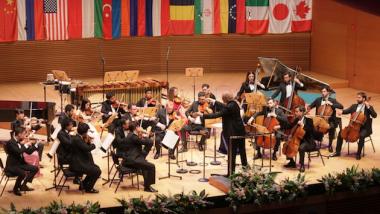 iPalpiti Inflates and Transforms the Kreutzer Sonata at Disney Hall

The Festival of International Laureates rolled around to its annual grand finale July 20 in Walt Disney Concert Hall — which, unlike many concert halls, keeps on humming during the summer months with visiting orchestras and rentals. As always, the concert was staffed by iPalpiti — the festival’s flagship ensemble of 23 expert young string players from around the globe — and led by the group’s perennial maestro and co-founder, Eduard Schmieder.

One thing that hasn’t changed in the 22 seasons of this festival’s existence is Schmieder's willingness to ignore fashion and so-called authenticity by programming out-of-the-way, audience-friendly repertoire and transcriptions of chamber pieces. He remains firmly on message, presenting another spirited riposte to the period-performance-practice crowd in his “Letter to the Audience” in the program book. This served as a no-apologia preface to what iPalpiti calls the “U.S. premiere” of a Beethoven string symphony, after the Kreutzer Violin Sonata in C Minor.

What’s that, you say? It’s really an arrangement of an arrangement of the Kreutzer Sonata blown up for strings, from an actual version for string quintet that was made in 1832. There is no credit for the quintet arrangement, although Schmieder speculates that Beethoven himself, along with his assistant Ferdinand Ries, might have been responsible.

Other hands have long been inflating Beethoven chamber works for string ensembles — Mahler’s transcription of the Op. 95 Quartet (which iPalpiti has often played), Leonard Bernstein’s go at the Op. 131 and Op. 135 Quartets, to name but a few. Even Toscanini, no doctrinaire purist he, tried his hand at Op. 135 and the Septet. These treatments remain controversial, yet I’ve always been partial to them; they add heft and sensuality to scores that are usually sturdy enough to take on the extra weight and I don’t mind the loss of intimacy. I would say the same for this Kreutzer arrangement, which is most convincing in the Finale.

The whole thing was played with zest and fire by iPalpiti, with unified execution in rapid passages originally written for the solo violin that sound difficult to hold together, and equally cohesive delicacy in the quiet variations of the second movement. It was preceded by Mendelssohn’s Symphony No. 13 for Strings — also known as Sinfoniesatz — a single movement capped by a fugue that would be an astonishingly accomplished feat for anyone, let alone the 14-year-old who wrote it.

Interestingly, the first concert I ever heard from iPalpiti 20 years ago also contained a Mendelssohn string symphony (No. 10) and Beethoven for strings (Op. 95). They were camped in the outdoor John Anson Ford Amphitheatre then, and I might note that both their playing and their acoustical surroundings are far better now.

After the ensemble offered a fast, invigorating rendition of Vivaldi’s Concerto Grosso for Four Violins in B Minor, RV 580, there were a couple of world-premiere commissions. First, the Azerbaijani composer Franghiz Ali-Zadeh — the festival’s composer-in-residence this summer — came up with an attractive movement of insistent percussion and exotic tunes drenched with local color from the old country, under the title Harmony.

The second was Fantasia Hungariana, in which Moscow-born composer/pianist Sergei Dreznin integrated three Brahms Hungarian Dances (he didn’t say which ones) into a de-facto triple concerto showcase for the festival’s charismatic ensemble-in-residence, Trio Zadig (Boris Borgolotto, violin; Marc Girard-Garcia, cello; Ian Barber, piano). The piece is a rich, rhapsodic blend of strings and piano trio with outbreaks of a Roma flair (at one point, the rippling piano seemed to imitate a cimbalom) and a few distinctly 20th-century harmonies that crept up to the borderline of jazz.

Tchaikovsky’s Elegie served as an elegant, wonderfully hushed benediction to the whole evening.

The acclaimed violinist shares how she lives with music, rather than trying to conquer it.

Composer Rodolphe Kreutzer — pretty much off the public’s radar, but very much on the violin student’s — is brought to life in a fantastic CD by Axel Strauss thanks to his incredible nimbleness in both hands and one utterly lovely cantabile.