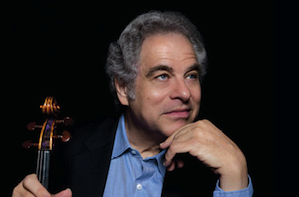 Weill Hall at the Green Music Center in Rohnert Park is actually two halls: one inside the graceful building and one outside on the amphitheater-shaped lawn. The two connect at the back of the hall, where giant panels can be slid open to bring the outdoors in and the indoors out.

Perhaps the best view of this dual identity is to be had from the "choral circle," two or more rows of seats that encircle the sides and front of the hall. The seats on the sides face forward, so you can pan back and forth between the lawn and the stage, as if watching a tennis match.

This dual identity is visually striking, but it does lead to an important sonic challenge: How to transmit the sound outside while preserving the acoustics within. The answer at this point seems to be amplification in both spaces, as was made abundantly clear in the opening notes of Itzhak Perlman's Sept. 21 recital at Weill. For the first few bars of the opening piece, Beethoven's Violin Sonata No. 1, the sound of the violin within the hall rang out impossibly loud. The culprit was a discrete black microphone positioned a few feet in front of Perlman, who was seated in an electric wheelchair. A hidden technician turned down the volume, and the violin assumed a more normal acoustic relationship with the piano, which was also miked.

For the purists in the audience, the illusion of unadulterated sound was s hattered, but some acoustic compromises seem inevitable, given the nature of the space. In any event, Perlman's playing soon put all those issues to rest. He would be just as beguiling on an electric violin as on a Stradivarius.

All his fundamental qualities were on display in the Beethoven: a muscular sound marked by extreme fluidity, exquisite bowing, nearly perfect intonation, well-controlled dynamics and maximum expression. His many runs up and down the fingerboard were flawless, played as gently as the breeze wafting in from the lawn.

In the slow second movement of the Beethoven, a classic theme and variations, Perlman let the tune ring out and then made each variation utterly distinctive, from strident to sweet to majestic. His able accompanist, Rohan De Silva, led off the third movement vivaciously, striking the unexpected sforzandi to dramatic effect. Perlman echoed those surprises, then added some of his own, imbuing Beethoven's sonata with great narrative urgency.

That same sense of a master storyteller emerged in the next work, Grieg's Violin Sonata No. 3, his last and most popular sonata. This uber-Romantic work is just a few notes shy of being a full-blown concerto, particularly in the last movement, with its familiar call-and-response format. The opening movement has a strong sense of foreboding, with a repeated seven-note phrase punctuating the texture like an insistent Morse code. Perlman's bowing for this phrase was incredibly supple, shifting seamlessly from long notes to staccato bursts.

The dreamlike second movement, with its slow, heartbreaking melody, set the stage for the rollicking final movement, replete with folk dances and virtuosic displays. Perlman really inhabited the sonata, displaying supreme confidence throughout its performance.

With those two full-fledged sonatas under his belt, Perlman opened the second half of the show with Fritz Kreisler's arrangement of Baroque composer Giuseppe Tartini's Devil's Trill sonata. The arrangement probably makes historically informed performers cringe, but it's a lot of fun, with incessant double-stops, portamento galore, and the obsessive finger-twisting trills of the title. By the climax, the melody is buried beneath such a thick layer of trills that the violin sounds like an entire orchestra.

Perlman followed the Tartini-Kreisler with two more Kreisler arrangements of obscure Baroque and Classical composers, first from Giovanni Martini and then from Francois Francoeur, whom he described as a "legend in his own home." Both were sonic baubles based on simple melodies.

Next came Tchaikovsky's Chanson sans parole, which Perlman joked had been written for a friend of the composer's stuck in prison. This was somewhat meatier musically, with a charming lyric theme and some effective harmonics at the end. A Caprice by Henryk Wieniawski followed, again arranged by Kreisler, this time with bowing so rapid that Perlman's wrist fluttered like a bird's wing.

The program proper concluded with Brahms' Hungarian Dance No. 1, as arranged by Joseph Joachim. Here Perlman set a furious pace with lots of rubato and some upper-position work that got a little dodgy toward the end. The encore, after thunderous applause, was Antonio Bazzini's Dance of the Goblins, a showpiece to end all showpieces. The technical demands are almost beyond belief, but Perlman appeared unfazed as his fingers flew across the violin, each one apparently in several places at once. It would have been electrifying even without the microphone.