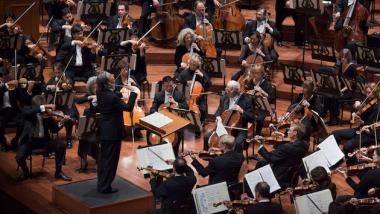 Itzhak Perlman Masterful With the Violin and Baton at S.F. Symphony

Should you meet your hero — or, rather, hear him? It’s an age-old dilemma; at this point, Itzhak Perlman has been so beloved for so long, even the “Can he still play?” conversation is getting tired.

For what it’s worth, my answer’s yes: On Saturday, performing with the San Francisco Symphony to a packed house, Perlman’s technique showed fewer signs of aging than other musicians I’ve written about this season. He was a superb partner, playing the violin solo to Eugene Izotov’s oboe, in the Bach Concerto BWV 1060.

The duo’s interpretation was essentially middle-of-the road: not especially baroque in style, but not overly romantic, either. Izotov’s playing was fluid and long-breathed, and Perlman’s chief characteristic was good sound — consistent, like Perlman himself. In fact, even if he’s never been my personal hero, his proficient and sensible recordings have always, blessedly, been there, from the first student concertos to the heavyweights and beyond.

This double concerto is one of Bach’s “reconstructed” works. A separate arrangement Bach made, for two harpsichords and orchestra, forms the skeleton for this version, whose score was lost. To flesh it out, scholars had to determine both the identities of the intended solo instruments and how to distribute the material among them, but there’s no doubt about the melodic material, which is all Bach’s.

And yet it does feel lesser than some of the other concertos that feature violin. Low-lying solo lines, particularly in the first movement, together with the not-especially resonant key of C minor, means that the solo violin part isn’t always prominent. Against a full-bodied orchestra, neither, sometimes, is the oboe. But taken as a whole, Saturday’s performance came off well. The first movement was flowing and genteel, the finale’s quick lines brilliant (no hints of wobbling from Perlman). The duo’s trading of melodic lines in the singing Adagio, against the orchestra’s thrumming, was a highlight.

Perlman conducted the other works on the program: Elgar’s Enigma Variations and Tchaikovsky’s Serenade for Strings. Like most violinists, he’s dedicated most of his life to violin, not conducting. Aside from a few messy starts in the Elgar, though, his baton technique seemed to work. It was a well-characterized performance.

Some variations, like the gentle VIII (W.N.) and nostalgic IX (Nimrod), can almost seem to play themselves — but, put together, these 14 variations on an unlikely theme don’t automatically come off. It’s a testament to the S.F. Symphony musicians and Perlman that some of it sounded effortless.

In particular, Variations V and X were charmingly light, and VII and XI were thrilling. Violist Katie Kadarauch beautifully phrased her solos and clarinetist Carey Bell, in his seamless lines, evoked a far-away idyll.

Each theme in the Tchaikovsky, too, was handled with care — and, in the smaller group, with more clarity. The first movement was both sweeping and lilting, stately and joyful. The second movement’s easy waltz was refreshingly simple, with just two heaping spoons of schmaltz. A moving tempo made the Élégie uniquely vital, and if the melodies — and those hard-to-place triplets — breathed easily, the coda’s start-stop phrases seemed breathless. On the other hand, a moderate tempo in the finale, on a Russian theme, helped outline the fugal development section.

Every small orchestra and would-be orchestra has to have played this serenade, but it’s not so often that a major symphony orchestra strays from Tchaikovsky’s larger works. What a simple pleasure to hear this heartfelt music played by the excellent musicians (and many excellent subs) of the S.F. Symphony.

The violinist has been in the public spotlight for many years but retains his youthful enthusiasm.

Italy, According to the French, at S.F. Symphony

Stéphane Denève leads a compelling performance, and Gautier Capuçon is the soloist.