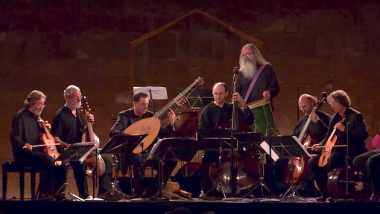 The Catalan viola da gamba virtuoso Jordi Savall has been an early music legend for decades, between the famous soundtrack for the 1991 film Tous les matins du monde and the scores of CDs Savall and his ensemble Hespèrion XXI have issued over since the 1970s. And on record, Hespèrion XXI is hugely lively and varied, to the extent that New Yorker critic Alex Ross once called their CD Villancicos y Danzas Criollas their “unofficial dance-party CD,” and that has long been among this writer’s favorite recordings.

Friday’s program, relocated to the vast and chilly Zellerbach Hall following the disastrous fire last October at First Congregational Church, didn’t come close to meeting the expectations set by Hespèrion’s discography. Until its last 15 minutes, the dully programmed concert was sleepily played within a too-narrow emotional and sonic range.

On paper, the program looked as though it had considerable variety, with dances and polyphonic works from all over Europe written between 1500 and 1700. Ostensibly, the point was the influence of Venice and Venetian music across the continent, but this influence was not readily apparent. And as performed, the program was far more puzzling than enlightening. The works might as well have been chosen at random.

Savall’s chosen ensemble for this concert was a major villain. Four viols, a violone, a theorbo or guitar, and percussion made for a long, long night of unvaried timbre. Moreover, that timbre was rarely mitigated by significant dynamic and tempo contrasts or variations in bowing and articulation. The theorbo’s gentle voice was hardly ever audible from my seat, though the guitar did make itself heard. The percussion added little drive to the group’s playing.

Occasionally, a piece would stand out from the sameness. Giorgio Mainerio’s “Hungaresca” featured a drone and some exotic blue notes. William Brade’s “Ein Schottisch Tanz” (A Scottish Dance) was so obviously Scottish that you would not be at all surprised to hear it played at a modern-day contra- or English country dance.  Hespèrion played three anonymous dances from the Philidor Manuscript with more flair than they brought to most of the program.

It probably should not have been a surprise that far and away the most engagingly played music on the program came from the Iberian Peninsula. Reviving the great works of that region has been a goal of Savall’s throughout his career, and it certainly is his metier. The works by Pedro de San Lorenzo and Antonio Valente at the end of the program, rich with pizzicato and other effects, finally sounded like the Hespèrion XXI of the recordings, as did a pair of encores.

The beloved church building will be out of commission for a while, and performers are scrambling to find replacement venues. UPDATED Oct. 11