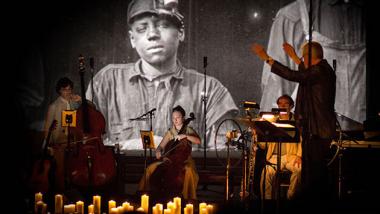 In just over an hour, composer and lyricist Julia Wolfe takes the listener down deep into the Anthracite Fields. There, in her 2015 Pulitzer Prize-winning oratorio, she brings us face-to-face, heart-to-heart with life inside the grim and stolid grandeur of the Pennsylvania coal mines.

Mournful and ecstatic, raging and contemplative, the piece sweeps history, politics, folk song, a litany of miners’ names, and tender oral history into a singularly and sometimes mysteriously moving experience. I can’t have been the only listener in Berkeley’s Zellerbach Hall choking back tears more than once on Sunday night, without fully understanding what was happening to me. But that’s all to the great credit of this remarkable work, which short-circuits rational response and taps into our unguarded instinct for human connection.

Presented by Cal Performances for one night only, alas, “Fields” got a fully committed performance by the Bang on a Can All-Stars and the singers of Cappella SF, with projections by Jeff Sugg. Ragnar Bohlin conducted with sensitive, balanced precision. Two of the six musicians, cellist Ashley Bathgate, and guitarist Mark Stewart, provided key vocal solos.

From its first low keening notes, the piece invokes the feeling, without ever being specific about it in either musical or visual terms, of being inside the dark, dangerous, twisting interior spaces of the mines themselves. By evening’s end, we’ve blasted above ground to hear an impassioned speech (by labor activist John L. Lewis) about the protection the miners and their families are owed, ponder all the comforts we enjoy because of our coal-powered “appliances” and witness a lush garden blooming in one the region’s “patch towns.” But somehow, even when Wolfe ranges far from the predominant Minimalist solemnity of her pastiche score and libretto, the gravitational pull of the mines themselves remains the defining force.

The first of five titled movements, “Foundation” uses a chant-like simplicity to recite names from the Pennsylvania Mining Accidents index of 1869 – 1916. As in medieval chant, Wolfe migrates only a few notes up and down from the anchoring tone, as the coal dust-smeared faces of miners loom on the back curtain above the stage. Now and then, like an abrupt accident warning, the litany is intercut by jangly percussion and a waggling light. Danger, even to the memorialized dead, it seems, is a fundamental, ever-present fact of coal mining.

But it’s in the gradual transformations rather than sudden shifts in her textures that Wolfe draws the listener farther and further in. The middle section of “Foundations” uses a line about the anthracite formed in “layer upon layer upon layer buried deep” for the black-clad choir to build richly voiced chord after chord into a pressurized tonal cluster. Then, as more names spool up like credits in some somber tribute film, the lustrous simplicity of the singing resumes.

Transformations like that happen over and over again. Even as she samples a drumstick-driven syncopation or alt-rock frenzy, Wolfe, a Bang on the Can co-founder, creates consistently stirring dramatic effects. In “Breaker Boys,” about the young workers who had to pluck debris bare-handed from thundering coal chutes, a jittery patter song (“mickety pickety rickety tickety lickety splickety”) gives musical shape and form to the action. Ace percussionist David Cossin’s insistent tapping on a hollow can adds an eerie punctuation point.

Arresting, in a different emotional register, are the shining open fifths rising over a murmurous guitar figure in the “Flowers” section. The trance-like text is drawn from an interview with a daughter and granddaughter of miners. Sugg’s projections here are both sinuously organic and austere, the underground bulbs of the plants bearing a resemblance to gnarly lumps of coal. “Flowers” is at once a sweetly quiescent and heart-rendingly complex interlude.

Anthracite Fields stays uncompromising right to the end. It’s impossible not to hear the direct address of “Appliances” (“Grind the beans. Shave your face. Run the dishwasher. Order a book.”) as both a challenge and a charge about our complicity with the coal industry, indeed with the wider post-industrial economy. Accompanied by period shots of assembly-line factory workers of all types, the final section of the piece leaves a troubling afterglow. How fitting, then, that the singers are left literally speechless in the final measures, their whistling fading and fading away toward extinction.

On the Making of Anthracite Fields

Composer Julia Wolfe melds the refined and the vernacular into new music.