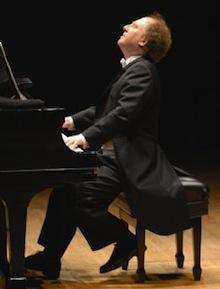 On a day when several uncontrollable elements — lousy weather, football playoffs, hospital construction — conspired against them, guest conductor/pianist Jeffrey Kahane and the Santa Rosa Symphony packed the Wells Fargo Center by excelling at the one element firmly under their control: great music-making. Kahane in particular had a fantastic day, returning in triumph to the orchestra he led for a decade, playing his heart out for a Mozart concerto, and reconnecting with musicians who clearly enjoy working with him.

The Sunday afternoon concert began with the Mozart Piano Concerto No. 25, with Kahane conducting from the keyboard. The piano, sans lid, was centered between the violins and the lower strings, with the keyboard parallel to the front of the stage. From his position at the ivories, Kahane could make eye contact with every member of the reduced orchestra, which featured a small complement of strings, one flute, one timpanist, and pairs of oboes, bassoons, horns, and trumpets.

Kahane stood to conduct the opening of the first movement without benefit of baton or score. He used both arms energetically and coaxed a crisp, flawless sound from the attentive players. Sitting at the piano when his turn came to play, he continued to conduct with his head and sometimes with whatever hand happened to be free. Even as he navigated the trickiest passages, he gazed steadily at the orchestra, communicating via arched eyebrows, stern visages, and occasional smiles.

Kahane is a wonderfully expressive pianist who articulates each phrase with the utmost precision. His hands are a marvel to watch, seeming to be utterly relaxed while sprinting up and down the keys with nary a misstep. His playing during the cadenza, which he wrote himself, was particularly enchanting. Here he embellished on the theme, mixing elaborate ornaments with some unexpected dissonances, ultimately sounding a bit like Beethoven as he drove to the conclusion.

Kahane is a wonderfully expressive pianist who articulates each phrase with the utmost precision.

Where the first movement was dazzling, the second was all expression, one of those ineffable Mozart Andantes that seems to float on a cloud. The melodic line here is paramount, and both orchestra and pianist played it to the hilt, each note fully sustained and leading into the next.

The last movement, an infectious Rondo, began at a brisk pace and never let up. Kahane traded solos with the flute and principal cellist and then led the orchestra in an extended romp to the finish line. The ovation was immediate, with many loud cheers mixed in.

During his tenure with the Santa Rosa Symphony, Kahane made a point of championing certain 20th-century composers, such as Leonard Bernstein and Michael Tippett, whose place in the classical repertoire is open to debate. Despite his frequently performed piano concertos, Sergei Rachmaninov is still a member of that club, so the appearance of his Third Symphony after intermission was something of a rarity. When musicians refer to “Rach 3,” they mean the piano concerto, not the symphony.

There’s little danger that the symphonic “Rach 3” will displace the pianistic one, but the symphony does have its merits, albeit few. The first movement begins promisingly with a Russian-sounding theme from the clarinets, but it shortly morphs into a lushly orchestrated haze, with one melodic idea drifting into another, like a luxury liner lost in the fog. Any development or compelling narrative is hard to discern.

The playing was excellent throughout, and the frenetic ending verged on the spine-tingling.

The second movement begins in much the same way, though the structure here is more clearly defined, especially when the opening Adagio is displaced by a spirited Allegro vivace. Kahane kept the orchestra moving along during this section, eliciting great playing from the strings and a remarkable solo from the English horn.

After a festive beginning, the third movement settles into a fugue that displays Rachmaninov’s gifts for orchestration. Seemingly everyone gets involved in the increasingly manic action, which is regularly interrupted by languid interludes. The playing was excellent throughout, and the frenetic ending verged on the spine-tingling.

The audience applauded vigorously, so much so that Kahane launched the players into a rare orchestral encore, in this case Johann Strauss’ Fledermaus overture. The haze of the Rachmaninov was quickly displaced by the crystalline clarity of the Waltz King’s exquisite melodies and toe-tapping rhythms. Both Kahane and the musicians outdid themselves with a finely honed rendition that included several perfectly executed ritards and accelerandos, along with some dazzling solos, notably the lightning-quick piccolo figure at the end.

Santa Rosa was very fortunate to have a conductor of Kahane’s stature in the not-so-distant past, and it can only be hoped that he’ll be able to guest conduct regularly in future seasons. He still resides in Santa Rosa, and his fans are many.