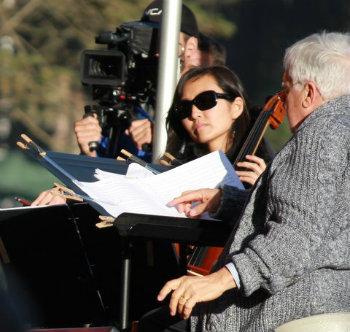 Perhaps for the first time, the Hardly Strictly Bluegrass Festival has stretched its equivocal moniker in the direction of Western classical music and ensembles. And that’s good and thoroughly entertaining news.

You could have heard a bit of Debussy’s Suite bergamasque from mandolinist Chris Thile, but classical fans and converts were parking themselves at the Arrow Stage, where the Kronos Quartet was setting up as part of Big Star’s Third, a tribute to the legendary 1970s power pop band Big Star and their “lost” third album, both claimed as an influence on a multitude of musically sophisticated purveyors of “modern rock” over the ensuing decades.

The original Big Star ensemble had been handled carelessly by record companies and promoters and lasted only three years, from 1971 to 1974, but its output was resuscitated through reissues, and the group reformed some 20 years later, though several founding members have since died. What’s left of Big Star, powered by original drummer Jody Stephens, has more recently been touring a set based on the track list from the album Third/Sister Lovers, recorded in 1974 and released by PVC Records in 1978. That’s what was heard at Hardly Strictly, and at the Great American Music Hall on the previous night.

The lineups for the current tour are considerably bigger than the original Big Star, and in Hardly Strictly fashion, both bluegrass quartet Chatham County Line and the Kronos Quartet were included here.

But the size of the ensemble made balance difficult, with horns sometimes blaring over the strings. But on particular numbers, including “Blue Moon” and “Thank You, Friends” (which concluded the Third-based selections), Kronos was prominent in its placement, affecting a mellow paternal presence against a trio of youthful voices.

Elsewhere, the Quartet manifested its flexibility and artistry in providing affecting swells (“For You”), perky pizzicatti (“Nighttime”), or folksy but elegant country harmonies (“Take Care”, “Stroke It, Noel”). Individual effort was notable in Harrington’s shimmery finish to “Blue Moon” and his gypsy-ish opening to “Holocaust,” with Sunny Yang investing deep soulful cello in the latter song.

Big Star’s identity isn’t easily perceived by the naked, uninitiated ear. The group’s power pop numbers (especially “Thank You, Friends”) are perhaps the most in keeping with the overall joyous intention and effect of Hardly Strictly. Others of the group’s offerings seem rather dreary, simplistic, or amorphous. Kronos sat out on some of these. The Quartet could, in a future foray at the festival, easily command attention with their own set of, say, some genre-jumping Terry Riley.

But what was easily perceived was the sustained force of Big Star’s legend, both among the throngs cheering through the early evening chill and among the participating talent on stage. Guitarist Chuck Prophet said of Big Star founder, guitarist, and songwriter Alex Chilton, who passed in 2010, “his time on earth will never be up”. The same was being said all weekend, all over Hellman Hollow, about Warren Hellman, the late multimillionaire and banjoist who founded the festival and passed in 2011.