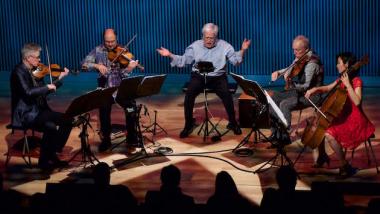 For the Kronos Quartet, “Here and Now” is a good place to be. On the second evening of Kronos Festival 2017, the three-day event at SFJAZZ, the quartet’s playing surpassed its 2016 level, and the compositions, by Bay Area-based composers, were as strong.

On Friday, Kronos’s hallmark string quartet adaptations of non-European musics were dynamic. Though the late Nubian composer Hamza El Din’s Escalay (Water Wheel), about a boy’s singing-induced trance, loses some of its narrative power in this shortened version, it’s a strong quartet. As adapted from the original oud solo and realized by Tohru Ueda, the quiet but firm accompaniment of second violinist John Sherba and cellist Sunny Yang complements the subtle heterophony of first violinist David Harrington and violist Hank Dutt. Sahba Aminikia’s arrangement of Rain, by Mohammad Reza Shajarian and Kayhan Kalhor, is masterful especially in the second section, where ricochet bowing is an unexpected rhythmic support.

The most exciting work was by Soo Yeon Lyuh, who performed on haegeum (a two-string fiddle) and drum in the world premiere of her quintet, Yessori (Sound from the Past). Too often, the group’s sole non-Western instrument seems, literally, like a foreign entity — but Lyuh, currently a visiting scholar at Mills College, creates a fully-integrated quintet where the haegeum’s presence feels natural and necessary. Under Lyuh’s direction, each musician performed the first section’s melodic lines, which are embellished with pitch-bending and surges of vibrato, in the same spirit. On drum, she steered the rhythmic second section, which blossomed into an invigorating finale. If traditional Korean music “felt chaotic” the first time she heard it (her foundational studies were in western music), Lyuh is now accomplished in both idioms.

The three works by U.S.-born composers were as diverse. An underlying sardonicism characterizes A Coney Island of the Mind, Van Dyke Park’s vaudevillian musical setting of poetry, which he recited, by Lawrence Ferlinghetti. Parks’s comedic timing was phenomenal in the premiered excerpts, which sound like grandchildren of Stravinsky’s The Soldier’s Tale, but some lines could have been earnest — particularly in the powerful “I Am Waiting.” “The poem is 45 years old, but I’m still waiting,” Ferlinghetti remarked in 2002, and on he will wait, “for a way to be devised / to destroy all nationalisms / without killing anybody.”

Carrying the Past (2012), by San Francisco’s Dan Becker, stood out for its use of electronics; the piece incorporates 1920’s 78-rpm recordings of his grandfather’s big bands. At times, this jaunty music doesn’t quite incorporate, and some episodes feel tacked-on. But Becker’s music is increasingly full of interesting textures (delightfully, Harrington and Sherba put on their mutes to join the tinny recorded violins) as he processes the recordings to abstraction. In one memorable moment, recorded pitches bend in a seeming Doppler effect, like an old train threatening to overrun the strings.

Most unexpected was the surprise appearance by Terry Riley, who, as prelude to his 2014 string quartet The Serquent Risadome, read his “short futuristic tale” that provided its name. The Autodaydreamographical Anteriopod, full of nonsense words and set to ambient, spur-of-the-moment accompaniment, would have been self-indulgent coming from anyone less wonderful than Riley — but it was funny and, in fact, an effective introduction for the strange piece that followed. The quartet teems with motifs that, in a blink, move from opposition to harmony; then, harmonics coalesce in a kind of science-fiction Bach chorale. This is Riley’s 27th score for Kronos, and each moment is fresh.

“Here and Now” is the festival’s theme, but Kronos’s most valuable work, the Fifty for the Future commissions of string quartets geared toward students and early career professionals, provides for tomorrow. Lyuh’s Yessori is one of these works, and Friday’s concert opened with another: My Desert, My Rose by Aleksandra Vrebalov. The piece features individual melodic patterns open in speed, length, and volume; and the students from School of the Arts’s Dragon Quartet made this music their own.