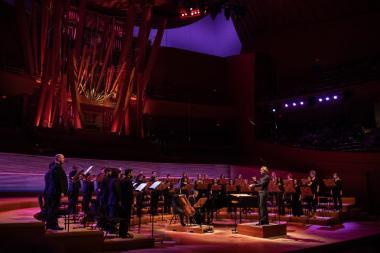 Of all the musical organizations that have been sidelined or relegated to limited stopgap activity online by COVID-19, the Los Angeles Master Chorale, like all choirs, is facing an especially existential threat to its future. One of the Master Chorale’s final projects before the shutdown was the first recording of The Sacred Veil (Signum Classics) by their artist-in-residence, the popular choral composer Eric Whitacre. The Master Chorale under the direction of the composer sings with its customary clarity and richness without, of course, knowing that the medical subject matter of the piece would prove adaptable to the situation everyone would be faced with only two months later. 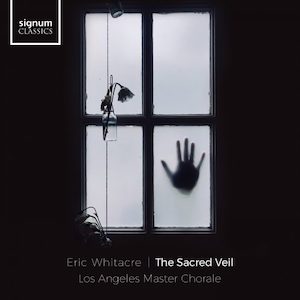 The Sacred Veil is a choral oratorio that deals with the illness and death from cancer of his librettist Charles Anthony Silvestri’s wife Julie at the heartbreakingly young age of 36. Coincidentally — or not? — another piece with a similar harrowing premise, Michael Hersch’s I hope we get a chance to visit soon, debuted in Southern California at the Ojai Festival the year before. At this point, the two pieces part ways drastically. Hersch, a cancer survivor himself, wants you to feel his pain as intensely and as savagely as his dissonances can possibly manage. Whitacre aims more to soothe and caress than place his burden on your ears. Which approach would you prefer in the middle of a pandemic?

Amidst the soothing lush harmonies — accompanied in spots by only Lisa Edwards’s piano and Jeffrey Zeigler’s cello, the perfect instrument for brooding and mourning — two of the piece’s 12 sections protrude most prominently in memory, and perhaps in nightmares. “I’m Afraid” is the cancer diagnosis, and the music builds and builds in complexity and ultimately, terror as it lays out in explicit medical language, just what the doctor’s words “I’m afraid we found something” mean. Musically, “You Rise, I Fall,” is the most ear-catching movement — as well as being the longest at 10 minutes — where the choral voices literally rise and fall in drifting glissandos. Julie is released from her pain and presumably rises to heaven while Silvestri falls into a spiral of grief.

The Master Chorale gave the world premiere in February 2019 in Walt Disney Concert Hall, but for the recording, they set up shop in January in the new Musco Center For The Arts at Chapman University in Orange — which in live concerts sounded as if it would be a fine recording locale and indeed proves to be just that. The recording includes a 22-minute talk with Whitacre and Silvestri in which they explain the motivations behind the piece, basically expanding a bit upon what they wrote in the booklet notes.

As I wrote before about the Hersch piece, one can only hope that future breakthroughs in medicine will make pieces like this topically obsolete.

’Til Death Do Us Part