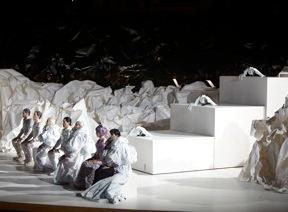 It was a major risk for the Los Angeles Philharmonic to undertake Mozart’s Don Giovanni as its first fully staged opera, in an unusually configured concert hall never intended for opera. Its current music director, 31-year-old Gustavo Dudamel from Venezuela, has conducted Don Giovanni in Berlin, but this is his first opera in the U.S.

They asked Frank Gehry, the architect of the silvery explosion where all this takes place, to design white objects onstage for singers to hide among or climb on, and two world-famous L.A. fashion designers to craft the mostly white costumes. Of the production team, only director Christopher Alden and lighting genius Adam Silverman have spent a major part of their careers in the opera world.

The result was a nearly unqualified triumph, the most exciting opera production I’ve seen in Los Angeles (of about 100, over 25 years), and one of the most musically and visually exciting Don Giovanni’s I’ve seen, out of 15.

Disney Hall’s complicated seating plan — 16 different seating areas completely surround the stage — presents a challenge to an opera producer. The L.A. Philharmonic’s solution was to place the singers and Gehry’s “installations” (three big white boxes, about three, six, and nine feet tall, rolled about inside what looks like miles of crumpled white paper or starched sheets), front and center, on a stage built over the normal orchestra space. The orchestra then sat in the near-dark on the chorus risers behind them, with chorus members on either side. Above that was what looked like more crumpled paper. Inexpensive seats above and behind all this were reserved for indigent opera lovers, who (like viewers in side seats) must have missed much of the action.

This was the most exciting opera production I’ve seen in Los Angeles (of about 100, over 25 years).

The glorious result, however, was that we heard every singer with crystal clarity, whether whispering or belting — and this cast of eight lead singers had not a single weak link. From where I sat (dead center in the uppermost row), the vocal acoustic was beyond-belief excellent. Mariusz Kwiecien was a vile, conscienceless, flawlessly sung Giovanni. Kevin Burdette mocked his master wonderfully as Leporello. Donna Anna (Carmela Remigio) and her patient, boring fiancé (Paolo Breslik) are mainly there to be miserable and sing a long chain of showpiece arias, which they did gloriously. Zerlina (Anna Prohaska, in lavender tulle, with purple-streaked hair — her “La ci darem” was perfection) and her Masetto (Ryan Kuster) were as fine as the director allowed. Donna Elvira (Aga Mikolaj) was dressed in black, presumably because of her role as Giovanni’s hysterical nemesis, as was the booming Commendatore (Stefan Kocan), whether living or dead. Along with Giovanni, Elvira dominated the music onstage, and Mikolaj drew well-deserved ovations.

Given the house setup, the L.A. Philharmonic pretty well had to play accompanists to the singers, rather than their equals. But they know their Mozart (Dudamel himself conducted the three-hour-plus opera, without a score), and I think the composer would have been pleased. A few quieter orchestral moments and musical jokes (like the three-band “Tanzscene” in Act 1, scene 2) were lost. Dudamel favors a slower-than-usual tempo, which removes some of the crispness and fun from this not very funny opera. A few of the show-off arias in the second half seemed to drag, however delectably they were sung.

Which brings us to the production. Alden (making use of Gehry’s movable blocks and crumpled white hedges) has come up with a very slow-paced — indeed, often motionless — minimalist, minutely choreographed, sexy/symbolic “version” of Mozart’s opera. It’s rather like a semiabstract dance based on the original. He dispenses with props and onstage crowds, so there are no swords or rifles, no champagne or partridge, no costume exchange. There is no ball, no gang for Masetto, no jolly singing dancers for his betrothal to Zerlina. Don Giovanni beats up Masetto with a look. He dines on nothing, sitting stock still before the 3-foot white block on which Leporello sprawls.

The glorious result was that we heard every singer loud and clear, whether whispering or belting.

Characters remain onstage — staring, sleeping, embracing — well into the next scene, which sometimes helps pull the opera together, sometimes just bewilders. (Get up, Ottavio!) The dead, all-black Commendatore wanders slowly about the stage, as if to warn us how all this will end. Although they rarely do what librettist Da Ponte’s stage directions propose, somehow the singers’ facial and body language, their climbing up or tumbling off the big cubes, and, above all, the audible emotion of their voices — whether in solos, duets, or ensembles — and always underscored by the orchestra, tells us all we need to know.

The production runs to May 26. Dudamel and Alden will mount the other two operas in the Mozart/Da Ponte cycle the following seasons. If they can maintain this high standard they may beat out the Los Angeles Opera (which will do its own production of Don Giovanni in Sept.) as the go-to place for opera in L.A.