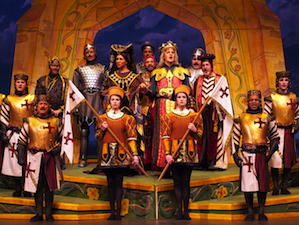 Lucky Livermoreans and Mountain Viewers (Viewans?)! Unlike people in San Francisco, who must choose between watching the Niners win the Super Bowl or attending the final Sunday matinee in Yerba Buena Center, they can see without conflict one of the finest Gilbert & Sullivan productions ever, Princess Ida, Feb. 9 and 10 in Bankhead Theater and Feb. 16 and 17 at the Mountain View Center for Performing Arts.

"Finest ever" — who says that? I do (see below), but more importantly, this production was also honored by the International Gilbert and Sullivan Festival in Buxton, Derbyshire, England. The festival website cites one award, Lamplighters claim "[sweeping] the awards ... for Best Production, Best Overseas Production, Best Director, Best Male Singer, and Special Adjudicator’s Award for Costumes," but even if it's not accurate, it should be.

At the Saturday matinee performance, I would have gladly given all those and many more awards because it was one of those rare occasions of everything going exactly right.

To begin with, there is the work itself, one of Arthur Sullivan's best, gorgeously melodious operettas, with layers of orchestral complexities, beautifully executed by the Lamplighters Orchestra, under direction by Baker Peeples. (First among equals, the woodwinds shone, led by Lucy Schoening's flute, Kathleen Conner's oboe, and Diana Dorman's clarinet.) Once again, Sullivan's contrapuntal device of simultaneous presentation of distinct melodies previously heard independently both intrigues and satisfies the listener.

A bonus in the music is its relative unfamiliarity in comparison with the usual G&S hit parade of The Mikado, H.M.S. Pinafore, and The Pirates of Penzance. Ida is not an obscure operetta, far from it, but its occasional reprises make it all the more welcome.

As usual though, there is no point in deep analysis when charming entertainment is at hand. Barbara Heroux's company has always managed to integrate the properly lighthearted approach with hard work and great talent — and that's the case here, in spades.

When the curtain rises on John Gilkerson's splendid sets and costumes, the Lamplighters Chorus rings out with a mighty, clear sound (communication further aided by supertitles), it's difficult to realize you're watching a production from a small company with limited budget. This is grand opera on the cheap, with nothing flimsy about it.

A new proof of ambition reaching beyond limitations is the beginning of a multi-year recording project, the Lamplighters capturing each G&S production, beginning with Ida, to publish CDs "for posterity of definitive recording of these well-beloved gems." The big project couldn't have started at a better time.

Exceptional Lamplighters regulars perform in Ida with maverick excellence. The always-brilliant Jennifer Ashworth in the title role sings marvelously, controlling a big, operatic voice to fit into the genre and ensemble. Robert Vann, the Prince Hilarion in the cast I saw, has an effortless, beautiful tenor. As the prince's busy sidekicks, Chris Uzelac and Michael Desnoyers are terrific, singing and dancing fetchingly as men or believably beauteous would-be females.

There is no weak link in the large cast. In the important secondary roles, Rick Williams' nasty King Gama (who "can't see why" he is despised) is hilarious.

And yet, it's not all these justly praised, perhaps gushed-about, elements of the production that make Ida a recommended alternative to the Super Bowl, but the Aristotelian whole that's more than the sum of its parts. This is a hell of a show, or whatever more appropriate and elegant phrase the Messrs. Gilbert and Sullivan would use.