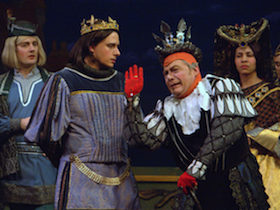 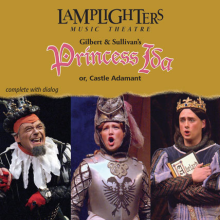 Some of us regret the disappearance of physical sound recordings (LPs, cassettes, CDs, and other antediluvians) in favor of cloud-based streaming, but there is no gainsaying of the fact that San Francisco's great, venerable Lamplighters may be experienced best in audiovisual form. Preferably live, of course.

Which is to say the Lamplighters' new CD of Princess Ida is but a substitute for the delightful experience of seeing the show. An inferior alternative, surely, but also an important memento, recorded at live performances, which saves the CD from studio audio "perfection," but preserves its original animation and energy.

I am lucky to have seen this production of Ida several times, enjoying it greatly on each occasion, and now, listening to the CD, those memories return and are enhanced.

Now harken to my strict command

When the Lamplighters' Ida conquered the 1995 International G&S Festival in England, the adjudicators opined:

"[The music] was as it should be: high quality, beautiful full part singing, principals who could easily achieve their highest notes and always brought the right dramatic content to a scene."

As back then, so it is now: The music bubbles like expensive champagne under Baker Peeples direction, the small orchestra and chorus credibly impersonate large forces of a major performance organization, and the soloists are beyond fine, more like dandy.

The only minor fault with the recording is that the Lamplighters' famous diction — here not supported by supertitles, of course — is a bit less clear than at a live performance. The strange but true fact that seeing the singers improves the clarity of hearing certainly applies here. Still, the dialogs, which make up almost half of the show, are totally clear.

This production has been in the works for years, with many performances, so it is smooth as silk, and yet hasn't lost any of its freshness and palpable enthusiasm.

One of Arthur Sullivan's best, Ida is gorgeously melodious, with layers of orchestral complexities, beautifully executed here. The strings, led by concertmaster Pamela Carey, and the woodwinds shine, led by Lucy Schoening's flute, Kathleen Conner's oboe, and Arthur Austin's clarinet. (I wish I could distinguish between instrumental performances on a CD, but the truth is I know this from having attended the performance being recorded.)

As I noted then, a bonus in the music is its relative unfamiliarity in comparison with the usual G&S hit parade of The Mikado, H.M.S. Pinafore, and The Pirates of Penzance. Ida is not an obscure operetta, far from it, but its occasional reprises make it all the more welcome.

The always-brilliant Jennifer Ashworth in the title role sings marvelously, controlling a big, operatic voice to fit into the genre and ensemble. Robert Vann, the Prince Hilarion, has an effortless, beautiful tenor. As the prince's busy sidekicks, Chris Uzelac and Michael Desnoyers are terrific, singing and dancing as men or believably beauteous would-be females.

There is no weak link in the large cast. Among the important secondary roles, Rick Williams' nasty King Gama (who "can't see why" he is despised) is hilarious.

And yet, it's not all these justly praised, perhaps gushed-about, elements of the production that make Ida a highly recommended show and/or CD, but the Aristotelian whole that's more than the sum of its part. This is a hell of a show, or whatever more appropriate and elegant phrase the Messrs. Gilbert and Sullivan would use.