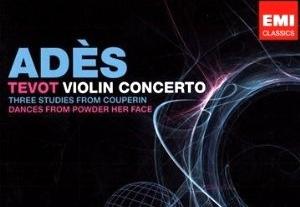 Whether in the gripping tone poem Tevot or in a supple reworking of Couperin, the listener is drawn into a fully imagined realm. While no vocal music is included here, the composer’s operatic output is reflected in the orchestral extracts from Powder Her Face and in repurposed material from The Tempest that partially fuels the violin concerto Concentric Paths. Adès, who is also a noted pianist and conductor, is a major musical force at age 39.

Tevot, in a potent performance by Simon Rattle’s Berlin Philharmonic, leads the way. This single-movement piece, which runs just over 22 minutes, has the eventfulness and scope of a fully realized symphony. The Hebrew word that gives the work its title refers both to an ark and to musical bars. The composer embraced both ideas, with the ark seen by him as a kind of spaceship that “carries us — and several other species! — through the chaos of space in safety.”


The opening measures conjure that idea, as the violins exude a high-pitched creaking that suggests the mechanical workings of some voyage into the unknown. Meanwhile, the orchestra seems bent on struggling upward against a gravitational force. In a moment of breakthrough liberation, a jolly capering breaks out in the woodwinds and percussion, building to a triumphalist exclamation in the brasses. We’re off!

Journeys are both exhilarating and perilous, Tevot affirms. That brassy excitement travels into something more fevered, with an unstable rhythmic intensity that recalls The Rite of Spring. And then, like a great light dawning across the heavens, Adès unfurls a swaying, lushly Romantic passage. It comes as a revelation, a tonic region at once deeply familiar and freshly discovered. With the reprise of that haunting, high-pitched creaking, Tevot heads for a ravishing soft landing, its precious cargo intact.

The 2005 violin concerto opens in a busily restless mood, with the soloist sometimes chattering along with the orchestra and sometimes hovering above in tremulous, long phrases spun out and suspended above the fray. Fans of the composer’s Tempest opera may recognize some of Ariel’s vocal line here. The long centerpiece of the concerto’s three “Concentric Circles” features the cumulative intensity that Adès can muster with seemingly spare means. Soloist Anthony Marwood, for whom the work was written, can turn a simple interval into something full of inconsolable anguish. A thumping percussion outburst helps bring the final movement, titled “Rounds,” to a fitting conclusion. The composer conducts the Chamber Orchestra of Europe with a sure hand.

Adès is on the podium again, with that same band, for his Three Studies After Couperin. These altered orchestrations of keyboard works by the French Baroque master have a beguiling fun-house mirror effect, as if the notes and their relationships had been taffy-stretched here and squashed flat there. Couperin is fully recognizable in what amounts to a comic homage.

The composer’s flair for humor is in full flower in the Overture, Waltz, and Finale from Powder Her Face, a 1995 chamber opera based on the sexual exploits of a 1960s British duchess. If music could make you blush, Adès’ swooning, sniggering dirty joke of an overture could do it. The waltz is a similarly woozy affair, with the triple meter only intermittently detectable. A nutty tango breaks out in the midst of the careening finale. The National Youth Orchestra of Great Britain, under Paul Daniel, is up to every naughty joke Adès hands it.