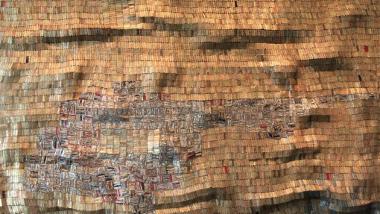 Monday night’s Left Coast Chamber Ensemble concert may have taken place at the San Francisco Conservatory of Music, but the performance was psychically linked to the de Young Museum, specifically Gallery 16. This room houses two, striking, large-scale sculptures made of scavenged materials. Each sculpture inspired three works by young composers, all written in 2015 for the Left Coast’s final program of the season, “Left Coast Goes to the Museum.”

Cornelia Parker’s sculpture, Anti-Mass, was the inspiration for the first half of the program. The statue consists of the charred remains of an Alabama Southern Baptist Church that was destroyed by arsonists. Composer Jean Ahn’s Lapis Reprobatus depicts this brokenness through abrupt bursts of pitched and unpitched materials. The overall effect is tremendously sonorous; it exceeds the sum of its parts. Flutist Stacey Pelinka, clarinetist Roman Fukshansky, and cellist Leighton Fong formed a tight trio.

In Emily Koh’s implodex!!, the musicians surrounded the audience members on all sides of the performance space. Unorthodox spatial designs often come off as gimmicky, but Koh’s setup was effective: By necessity, the players conducted each other, mirroring the system of the sculpture, in which each piece is equally important to the whole. Oboist Thomas Nugent, in particular, played with beautiful tone on his virtuoso flourishes and multiphonics.

Jonathan Bailey Holland’s His House Is Not of This Land takes the audience inside the church, with melodic gestures that evoke the human voice and a harmonic language influenced by spirituals and blues. Violinist Phyllis Kamrin played outstandingly expressive solos.

The second half of the program included three works written in response to Hovor II, a wall hanging by Ghanaian sculptor El Anatsui. Coincidentally, each composer portrayed the tapestry (made of discarded liquor bottle tops and copper wire) from a different vantage point, resulting in a multifaceted musical depiction of the artwork. Mei-Fang Lin’s string trio draws inspiration from the sculpture’s constituent parts. Viewed from afar, she said, the hanging has a regular pattern, yet on closer inspection every bottle top is unique.

Mei-Fang Lin’s string trio draws inspiration from the sculpture’s constituent parts. Viewed from afar, she said, the hanging has a regular pattern, yet on closer inspection every bottle top is unique. Lin’s work consists of small, slightly varying cells; she apologetically described it as physically demanding for the performers. Indeed, it is a strenuous work, but not needlessly so: every idea — unceasing tremolo figures, crashing unison chords — unfolds with intention. Violinist Kamrin, cellist Fong, and violist Kurt Rohde gave a compelling performance.

In contrast, Ryan Suleiman’s Up Close and from a Distance depicts the tapestry as seen from a distance. His impressionistic textures and large melodic gestures capture the sheer magnitude of the hanging, which measures about 15 by 15 feet. In Recyclate, Nick Benavides highlights the wire that holds the artwork together. He weaves snippets of his musical influences — pop, jazz, rock, Ravel — over a foundational rhythmic structure. Fukshansky’s bass clarinet melodies soared over the large ensemble.

The work, about a young man mourning the death of his father, seems indebted to the operas of Alban Berg: Leuschner explores the whole gamut of human emotion, including grief, rage, and madness. Indeed, Monday’s audience chuckled intermittently, likely out of discomfort with the intensity of emotions depicted on stage.

Taddei’s performance — encompassing sweet melodic lines, rhythmic and unpitched vocalizations (the composer is a percussionist), and sprechstimme — was totally committed. Fong played with affecting rawness in the meaty chords of his solo movement.

The evening began with excerpts from Mussorgsky’s Pictures at an Exhibition. Pianist Eric Zivian gave a powerful, if hurried, performance. His sound in the opening Promenade was no less impressive than that achieved by the full orchestra in Ravel’s famous arrangement, and in the subsequent promenades, he achieved a range of characters. Zivian’s Bydlo — Cattle — was deliciously heavy.