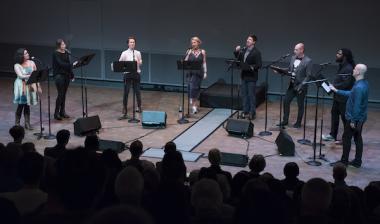 Listening to Shakespeare Through a Roomful of Teeth

In the last hundred years or so, composers have challenged and expanded the technical abilities of instrumentalists by incorporating new and unusual performance techniques into their compositions. Woodwind multiphonics, the use of overtones, key clicks, singing into wind instruments while simultaneously playing pitches on them, and many other techniques have become common, but it’s still unusual to hear individual singers in the western classical tradition, let alone a chorus, using extended vocal techniques.

Since its founding in 2009, the bravura new music group Roomful of Teeth has been out to change this. Their exhilarating, first San Francisco appearance, at the Taube Atrium Theater, gave spectacular voice to the vast range of possibilities open to singers. Unlike most classical groups, they are amplified and take advantage of the amplification to boost their voices and the extended techniques they employ. I’ve rarely heard such remarkable musical coordination, superb intonation, and outstanding musicianship from a group of vocalists, and I don’t think I have ever heard such a wide repertoire of vocal effects before.

Sunday’s program, called Shaw & Shakespeare, was presented by SF Opera Lab and San Francisco Performances’ PIVOT. William Shakespeare, whose presumed 453rd birthday was this week, needs no introduction. The Shaw of the program title is composer Caroline Shaw, winner of 2013 Pulitzer Prize for Music and an alto in Roomful of Teeth. The program included Shaw’s Pulitzer-winning Partita for 8 Voices, in its Bay Area premiere, and Shakespeare settings by Shaw, Anna Clyne, and Eric Dudley, all in their West Coast premieres.

Shaw structures the Partita as a suite of four movements, Allemande, Sarabande, Courante, and Passacaglia, much like any Baroque suite, and each movement takes its Baroque counterpart as a starting point. You can’t always map each movement to its counterpart except in the most general way, but it doesn’t matter, so vivid and imaginative are the parts and the whole. There also aren’t a lot of words in the Partita, focusing the ear entirely on melody, harmony, rhythm, and vocal timbre, each of which can vary wildly from phrase to phrase.

The opening Allemande launches with a cascade of a spoken square dance calls, including, yes, the command to “allemande left,” and continues into a vivacious, ear-grabbing collage of styles and singing techniques. That variety continues into the slower Sarabande, where sliding between chords, percussive throat attacks, and even multiphonics feature prominently. The Courante opens with a series of breathy, panting, almost erotic phrases, sounding more like a steam train getting under way than almost anything else, and closes in a mighty rush of Americana. The closing Passacaglia does indeed have a repeating phrase around which variations are built. At times, its stately progression, with spoken text under undulating female voices, sounds like the choral analog of a Robert Wilson theater piece.

Shaw’s The Isle sets three excerpts from Shakespeare’s The Tempest, one each for the sprite Ariel, the slave Caliban, and the sorcerer Prospero. She finds a different stylistic voice for each, with Caliban’s melismatic chanting over drones perhaps the most distinctive.  The “Full fathom five” section of Ariel’s song is set to a lovely and fairly straightforward chord progression. In Prospero’s “Ye elves of hills, brooks, standing lakes, and graves,” the text is mostly spoken, and even buried under the complex choral singing swirling over it.

Anna Clyne’s Pocket Book, commissioned by Roomful of Teeth, sets Sonnets VIII (“Music to hear, why hear’st thou music sadly?”) and LXV (“Since brass, nor stone, nor earth, nor boundless sea”), using techniques similar to Shaw’s. In Sonnet VIII, she employs drones, parallel motion, wordless melismas, and whispers. In LXV, the text is deconstructed by the chorus, which sings over an actor reciting the poem. Both settings were musically lovely, though both also somewhat obscured the text.

The program closed with tenor Eric Dudley’s QuietUs, which sets the first four lines of Sonnet LX and some phrases from Hamlet’s “To be or not to be.” Dudley’s emphasis was far more on vocal techniques than on the texts, which were buried sufficiently in the choral texture as to be nearly unintelligible. The restless harmonies, harsher and less consonant than Shaw’s and Clyne’s were strikingly intricate, and the piece closed with a beautifully dissonant chord.

The Shakespeare settings all raised useful questions to ask about what to emphasize when setting a poem, because of their varying degrees of success in setting the text as text. Magnificent poetry, written by a great master, was largely buried under the vocal effects. Shaw’s music succeeded best in illuminating or clarifying the texts. Even in her settings, it was easiest to hear the text as a useful framework on which to hang highly imaginative music, rather than hearing the music as amplifying the beauty, narrative, or structure of the text.