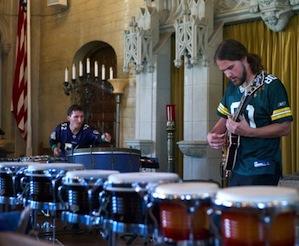 The advent of “indie-classical” music has gotten a good deal of discussion in the last few years. The term is used to describe the music of young composers who blend their interest in classical, indie rock, electronica, world music, and more. The genre has its stars, like Nico Muhly and Missy Mazzoli, as well as such influences as David Lang, Julia Wolfe, and Michael Gordon, and naturally it attracts many aspiring young musicians. On Saturday the Tangents Contemporary Guitar Series presented the Living Earth Show in the Unitarian Universalist Church. A duo made up of guitarist Travis Andrews and percussionist Andrew Meyerson, the Living Earth Show presented a concert ranging from the contemplative to the raucous in memorized and strikingly choreographed performances of entirely original material. They exhibited enough vision and energy to make them a much-sought-after presence on the indie-classical scene.

The evening began with You broke it, you bought it, by Timo Andres. A muted, haunting piece based on a single measure of the left-hand part of Mozart’s “Coronation” Concerto, it’s all about tonal relations between notes, as well as imitation and counterpoint between instruments. It featured an otherworldly bowed cymbal to begin and end the work.

I had heard the New York premiere of Samuel Carl Adams’ Tension Study No. 1 at Carnegie Hall, beautifully performed by guitarist Max Zuckerman and percussionists John Corkill and Ian Rosenbaum. The version that the Living Earth Show played in San Francisco was for one percussionist, and while I’m sure some changes were made, it was a thing of beauty to see Andy Meyerson, in essence, perform both percussion parts by himself.

They exhibited enough vision and energy to make them a much-sought-after presence on the indie-classical scene.

The piece, based on Adams’ love of blues guitar, featured a gradual loosening of the tension on the guitar strings as well as the tension between the resulting microtonal pitches and more-stable electronic pitches. The beautifully paced piece revealed a great deal of subtlety yet built to a magnificent, exhilarating climax.

Swedish composer Adrian Knight was represented by Family Man, a piece in five scenes with four electronic interludes. Inspired by the television series Mad Men, the composer calls out the line “He is our father and the best friend we’ll ever have.” Each scene, for guitar and percussion, paints a moody emotional landscape, and each electronic interlude consisted of a sample of what sounded like Big Band music from the 1940s. The piece has a compelling narrative arc and, again, a mostly delicate mood that led to a thunderous conclusion.

Both pieces gave the audience a wild and most enjoyable ride.

In addition to its discriminating explorations of sonority and tonality, the Living Earth Show puts on a fantastic indie-classical dance party.