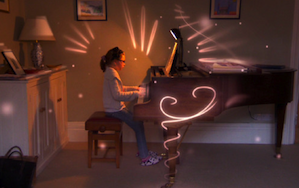 Hearing impaired since she was three, Lindsey Dryden has loved music for as long as she can remember. “I never found it was a problem,” she says of her deafness in one ear, due to Meniere’s disease. “You learn to adapt in ways you don’t even notice.”

Three years ago, Dryden, who works as a television documentary filmmaker in London, began to experience more dizziness than usual. A few weeks of “reeling around,” as she put it in a recent conversation, got her thinking what it would be like if she lost the rest of her hearing.

Thinking turned to action as Dryden started talking to other people, especially musicians, with hearing deficits. She interviewed neurologists and neuroscientists and attended a 2009 conference on “The Musical Brain.”

As Dryden went deeper into the subject of music and hearing loss, she opened doors into “these incredibly different ways of thinking about sound. If music isn’t just sound,” she wondered, “what else could it be?”

The result of all her probing is Lost and Sound, a thoughtful, nuanced and movingly resonant documentary that screened at the Napa Valley Film Festival. The movie is playing the festival circuit. It deserves a wide general audience.

Lost and Sound, is built around three interleaved stories. Emily, a young adult dancer, lost her hearing at 14 months. Holly, an adolescent pianist who lives in a family of musicians, relies on cochlear implants and hearing aids. Music critic Nick undergoes his crisis in adulthood, when he suddenly goes deaf in one ear. Dismayed by music turning “completely flat” for him, he stops listening to his beloved CD and vinyl collection altogether.

“When there’s something I love, I listen to it over and over and over again. I must be addicted to the pleasure and emotion of it, to the goose bumps.” — Lindsey Dryden, director, Lost and Sound

“What if you lost the ability to hear music?” the movie invites us to consider. “Would you find music again? Would music find you?”

In seeking answers to those deeply personal questions, Dryden’s film ranges from the practical to the aspirational, from physiology to philosophy, family dynamics to private meditations, auditory sensation to music’s profound transformative power.

We watch Emily in her dance classes and study images of Nick’s brain. We hear the way Holly might hear Beethoven’s Seventh Symphony, as muted underwater pulses. We sit in on Nick’s consultations with a neurologist and attend one of Holly’s piano lessons with a teacher, who says admiringly of her student, “She can hear through her fingers.” Holly’s open, smiling face and lively, sensitive touch at the keyboard send a steady beam of light through the film.

Like Dryden, the subjects of Lost and Sound, have all learned to adapt to their situations. “I feel like my body hears the music,” says Emily. “Dancing is part of my deaf.”

But adapting isn’t just accommodating or adjusting to limitations, the film suggests. Rather it summons forth powerful capacities of the senses, the brain, and the self. “Having this kind of experience can be very enriching,” says Dryden, who formed strong emotional bonds with the film’s three figures. “Nick and I share the worries we couldn’t with anyone else,” she says.

The music critic’s story is the most deeply explored and developed. The music that he once experienced as stereophonic “architecture,” he explains, is replaced by the equivalent of architectural drawings. As if that weren’t depressing enough, he’s tormented by tinnitus as well.

After banishing music for a while, Nick decides he wants to understand his disability. That sends him off to a conference and on to a neurologist’s office and a brain scan. As Nick gradually rewires his connection to music, he learns how is brain is doing it, activating new areas and neuronal pathways. “My brain,” he says, “really wants me to hear the music.” And so he does, forming what he describes as a deeper emotional response to music than ever before.

“I feel like my body hears the music. Dancing is part of my deaf.” - Emily, in Lost and Sound

Then comes the unexpected and disorienting news that a cochlear implant might not only relieve his tinnitus but possibly restore some of the hearing in his deaf ear. This “little maggot of hope,” as Nick strikingly calls it, sends him spinning. At one point this normally composed and analytical man has to walk away from the camera, overcome by the confounding flood of feelings.

In battling back from the disability, Nick has been granted a kind of paradoxical gift that he doesn’t want taken away, even if that meant foregoing a return to his pre-deafness life. Music has became more valuable and precious to him than it ever was. He’s rebuilt the architecture, a shining new temple for music fashioned both by his brain and his determination.

Dryden says her own hearing “seems stable at the moment. But I hate saying that out loud. You never know.”

On the film’s website (lostandsound.org), the director reveals her own “panic playlist” — the music you would listen to if you only had a few minutes of ordinary hearing left.” Her ever-changing list includes Simon & Garfunkel, Beethoven, Bjork, Radiohead, and Brahms. Readers are invited to add their own selections.

“When it comes to music I’m a child,” Dryden says. “When there’s something I love, I listen to it over and over and over again. I must be addicted to the pleasure and emotion of it, to the goose bumps.”

The director admits she was concerned that learning too much about how we hear and process music might burn away the magic. She asked the neurologists and neuroscientists who appear in the film if their studies reduced some of the mystery and awe of music for them.

Anything but, Dryden reports. “They were more awestruck than ever by music’s power in our bodies and our brains.”