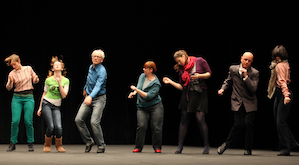 For the Love of Dance, All Together Now

If you love dance and dancers and classic tunes, you’d probably enjoy seeing and hearing what Jérôme Bel wants to tell you. If you love watching people — all sorts of people — this is also a dance maker for you. In short, the artlessness of French choreographer Bel has as much to tell us about dance as an evening amid the complexities of Petipa or Graham.

You will not hear this apercu expressed with such dogged simplicity in the hallowed academic halls of Stanford University’s dance division, home of the Festival Jerome Bel.

Jérôme Bel’s idea, if you haven’t guessed, is that the audience is part of the experience of dance and consequently has as much legitimacy in the art form as the artists who make it and do it. This isn’t a new thought. Post-modernism, going back to the Judson Dance Theater of the early 1960s has long been a valued part of modern dance.

Everyday movement plays a part. You can watch dance that looks like it takes no particular ability or training almost anywhere, beginning perhaps in your bathroom mirror and moving on to your neighborhood, your cardio dance class, your phone, your club, your world.

Conversely, you can watch dancers of awesome ability and compelling presence — we’ll call them People Not Just Like You — whether formally presented with other similarly gifted artists, or onstage alone, and even be part of their process.

Examples of both, and thanks to Bel, new ways we can think across the boundaries of artist and non-artist, performer and spectator, were on view, most instructively, refreshingly and — is there a word in academia that can equal “fun-ly”? — in two shows, each about 80 minutes long, at Stanford over the past two weeks.

In the first, The Show Must Go On, at Memorial Auditorium Nov. 13, the audience sat in the dark (in more ways than one), listening to three recordings, “Tonight,” from West Side Story, “Let the Sun Shine In” (Hair), and the Beatles’ “Come Together.” The sound was pretty lousy; it was like sitting in your car or kitchen with the radio on. But it was relaxing to just sit there; the low-keyness of the thing and the pleasant selection was good preparation for when the stage lights rose on a group of folks in street clothes. They would be the artists as we would be the audience. They could have been us, we (with rehearsal) could have been them.

Sort of. It was a mix that included a SLAC scientist in his 70s, a homemaker of similar vintage, a small boatload of PhDs, choreographer Robert Moses, a freshman in a wheelchair, a sophomore from China, two grounds people, a member of the volleyball team, grad students in philosophy, theater, and psychology, and an immunologist. A handful were in the dance field; some had never been onstage. The mix was similar to performance artist Ann Carlson’s at Stanford earlier this year.

They began dancing at the invitation of David Bowie (“Let’s Dance”), social-dance style. One guy kept dropping his jeans, revealing white briefs, and picking them up, and dropping them, faster and faster, which added spice to the piece as the audience began laughing. You could tell that some were accustomed to the stage, simply by how they carried themselves. But everyone looked good, the way you hope you look when you dance. Tempos picked up with “I like to Move It,” and laughter rippled as one dancer kept hanging onto the backdrop as she wriggled.

The men exited for the next piece, Ballerina Girl, which told us how many women have actually studied ballet and can dredge up a pleasing port de bras from the past (Muriel Maffre, formerly a star of San Francisco Ballet, had no need to dredge; watching her was a delight.) They returned for the Macarena, and the playlist, cued by a deejay at the center of the orchestra’s front row, went on, as in the schmaltzy Celine Dion song “My Heart Will Go On,” when the dancers paired up to emulate the Leonardo DiCaprio/Kate Winslet pose on the Titanic’s bow. There followed, appropriately, “Yellow Submarine,” the stage lit in a triangle of yellow.

The audience got lit in pink for “La Vie en Rose,” and a few couples were salted in to slow-dance in the aisles, the first of several participatory moments. Then everyone sat in the dark and sang “Imagine.” And there was more, including a lip sync to Roberta Flack’s “Killing Me Softly,” The Police’s “Every Breath You Take (I’ll Be Watching You),” and, last, the title song. The most interesting thing was how un-boring it was to be there.

Monday night’s Cedric Andrieux, a monologue by a French dancer of that name, is one of several Bel has produced. One is about a Paris Opera Ballet dancer; another, Pichet Klunchun and Myself, will screen at Bing Hall n Dec. 2.

Cedric Andrieux, an interesting exemplar of modern dance, has worked with choreographers Jennifer Muller, Merce Cunningham, and Trisha Brown. His monologue, via a head mic, played directly to the Bing audience, which was in full light. The acoustics were uncooperative and some of the narrative was indecipherable. What was heard, though, was a revelatory look into the life and times of one dancer. As Andrieux said himself, a lot of what happened in his life as a dancer had nothing to do with dance, but more to do with circumstance and happenstance, certainly a relatable notion.

He wanted to go to New York both to be there and to sleep with a certain dancer, so he joined Muller’s group. From there, he joined Cunningham, dancing with them for nine years and loving the experience, though he worried about his lack of communication with Cunningham. When the movement became too painful, he joined Trisha Brown’s company, whose movement is more natural to the body. As he danced excerpts from pieces by Cunningham and Brown, the mic picked up and made the audience party to the exertion as well as the beauty.

Because of the details of his story, and the self-awareness and modesty with which he spoke, it felt like a privileged encounter. It also felt as if Andrieux needed us to be there, especially when he recalled dancing in a performance in France of “The Show Must Go On.” As “Every Breath You Take (I’ll be Watching You)” played, Andrieux simply stood on the Bing stage and slowly and deliberately turned his head, focusing and smiling at the audience, section by section, to take us all in, the way we had when we watched him dance. We were part of his show. It was as simple, and as complicated, as that.