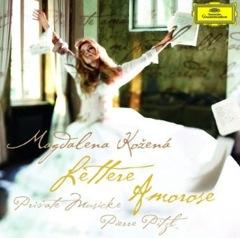 Love Letters From the Distant Past

The Czech mezzo-soprano Magdalena Kožená has recorded and performed music ranging from Bach, Handel, and Mozart to Berlioz, Debussy, and other French composers and to 20th-century composers from her native land such as Janáček and Martinů. She has long since proven her mettle in music of the high Baroque, and in her 2010 CD, Lettere Amorose, she adds to her recorded repertory Italian love songs by the 17th-century composers Monteverdi, Vitali, D’India, G. Caccini, Merula, Marini, Kapsberger, and Strozzi.

These songs are likely to be new to listeners who don’t collect early Baroque vocal music, but Kožená has been singing them since her days as a child chorister for the Brno Philharmonic. It shows: She brings a natural flair and easy virtuosity to the works, and, of course, a beautiful and distinctive sound. She sings with the same drama and urgency as Bernarda Fink and Montserrat Figueras, both renowned soloists in the early-music world.

These emotionally ripe, musically varied songs demand such an approach. They are nearly operatic in scope and intensity — some being more like arias, others like extended recitatives. Love is bitter; love is sweet; beautiful eyes and golden locks bring death; the moon flashes with golden flames, revealing a snow-white bosom; a man steals a few kisses from the cold lips of his dead lover. A lullaby sung by the Virgin Mary to her son takes on unusual emotional weight as she imagines the sufferings of the adult Jesus and her eventual meeting with him in heaven.

The marvelous consort Private Musicke, directed by Pierre Pitzi, partners Kožená brilliantly, with colorful and richly textured accompaniment provided by an array of bowed and plucked string instruments, plus occasional percussion. It also contributes several 17th-century instrumental pieces, which are interspersed with the songs. If you know the work of Andrew Lawrence-King and his Harp Consort, or that of Rolf Lislevand with the Ensemble Kapsberger, the general sound and improvisatory style of Private Musicke will be familiar.

Lettere Amorose has garnered considerable praise from critics, and rightly so: Add me to the list of fans. Get yourself a copy — and hope that Kožená’s current tour reaches the Bay Area this year.