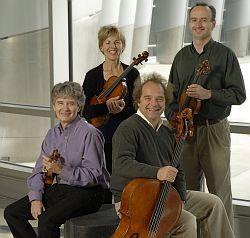 Lisa Hirsch on March 10, 2009
On Sunday, at Hertz Hall, the Takács Quartet played the second of their two Berkeley concerts this season. As with the first concert, an eminent guest joined the quartet. This time, we were lucky enough to hear Peter Wyrick, associate principal cellist of the San Francisco Symphony. While the repertory for cello quintet is bigger than you might think, Wyrick's appearance signaled a performance of the greatest of them all, and indeed one of the greatest of all chamber works, Schubert's C-Major Quintet, D. 956.

Written between June and August of the composer's last year, the quintet is conceived on an enormous scale, both in length and in the variety and complexity of its musical material. Themes spill forth, enough for a dozen or two lieder, and the harmonic and emotional ground shifts constantly under the players.

Pulling this profusion of ideas together presents considerable challenges to the performers, especially since few quartets touring the piece are able to bring along an extra cellist just for the Schubert. Wyrick, an experienced chamber player, fit in fine, taking the plangent second cello part and playing side-by-side with Geraldine Walther, long the principal violist of the Symphony.

The Takács quite rightly closed its program with the quintet; there is no other possible placement for such an overwhelming work. The ensemble's approach to the first movement was not always convincing, though it started promisingly, with a stylish hint of portamento in the first violin. Alas, there was just that hint, though more would be idiomatic in this work.

The great beauties of the movement were present in the performance, if a bit obscured by an overly fussy approach at a speed simply too fast, with an overemphasis on local details to the neglect of the long lyrical line. Shockingly, the Takács omitted the first movement repeat, unbalancing the structure further.

But all was forgiven in the subsequent movements, all played persuasively and with tremendous verve and command, and also using some interesting interpretive choices. In the opening of the sublime second movement, marked Adagio and played more slowly than is typical, the inner and lower voices, with their stately harmonic procession, were given more prominence than the first violin line that floats above the ensemble. The Takács blazed through the supercharged temperature of the middle section before settling back to the marvelous hush of the closing. They handled the bumptious Scherzo and solemn Trio with the same judicious choices of tone and tempo.

The Takács, now residents of Colorado, formed at the Liszt Academy in Budapest in the 1970s. Even after several personnel changes, their heritage came to the fore in the wild finale, played with an exceptional, and authoritative, amount of Hungarian lift and a genuinely improvisatory feel to the violin filigree, played with smooth grace by first violinist Edward Dusinberre. They earned the standing ovation they received.

That Magyar spirit came in handy, as well, in the vivid and muscular reading of Bartók's String Quartet No. 3 that closed the first half of the program. This quartet, a milestone in 20th-century chamber music, packs as much variety into its terse, 20-minute length as the Schubert does into its 45 minutes. The Takács played with splendid unity of tone and magnificent control, conquering every technical difficulty with the most musical of solutions, always clarifying the dense circular structure and interrelationships of the piece. I would have happily heard it twice through.

The program opened with Haydn's late Quartet in F Major, Op. 77, No. 1 (not No. 2, as planned and as annotated in the program notes, as Dusinberre announced before the Bartók), and what a fine opening it was, setting the stage well for the later pieces. While not as outsized as the Schubert, this quartet is written on a larger scale than many of Haydn's earlier works. The first movement repeat is a big surprise, so far has the harmony wandered from the tonic. The Trio, following an adventurous Scherzo, can't quite be taken seriously — yet the scale of the piece is more like that of a Haydn symphony. All in all, it was a remarkable work, opening a fine concert.