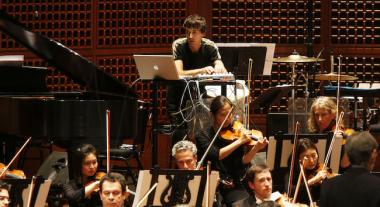 The San Francisco Symphony rigged up a beguiling hall of mirrors for its April 27–29 concerts at Davies Hall. Time, space, musical legacies, high-spirited humor, and the sound of an agile bassoonist were reflected and refracted through this ingenious, provocative, and gratifying bill. Given the program’s paired invocations of the Baroque — one in Ravel’s Le Tombeau de Couperin and the other in a Mason Bates world premiere — it could almost slip the listener’s attention that everything on the program was composed within the past 100 years. The musical past is ever-present, the evening affirmed, and the present always in search of a future that matters.

The whooshing sound that kept turning up in Bates’ Auditorium, a San Francisco Symphony commission that features the composer’s signature blend of electronica and live orchestra, was altogether fitting for both the piece and its context in the program. It served, in this ingratiating and good-natured work, as a kind of sound-effects nod to the time travel this 20-minute work undertakes.

With the composer himself stationed at a pair of laptops in the percussion section at the back of the stage, Auditorium sampled ghostly little fragments of faux-Baroque music. In a program note, Bates said he thought of these little wisps he composed and electronically processed as a kind of musical “poltergeist, animating the old instruments with inventive sound design.”

What gave the piece its immediate currency was the conversation he set up between old and new, natural and recorded sound. Some of it was highly specific, almost pointillist. A tinkling far-off harpsichord phrase got a matching response from Robin Sutherland at the piano. A Baroque oboe snagged principal Eugene Izotov’s attention.

The details were soon swept up in a larger enterprise, as Bates’ instinct for rhythmic and thematic spaciousness took over. Building up a mobile texture that took on a feverish jazz or bossa nova beat one minute and a jaunty Aaron Copland-esque canter the next, Auditorium would then melt into oceanic shimmers of tonic chords, only to regain its momentum and plunge on.

A propulsive, slaphappy pulse recalled Boléro — another Ravel reference for the night. Maybe it was the Bartók 1923 Dance Suite that opened the program, but Bates may have been channeling that composer’s coloristic Concerto for Orchestra as well.

The not entirely good news is that Auditorium served up a little bit of everything in a manner that seemed a bit too eager to please. Some of the piece came off as showy and cinematic, less ambitious and bracing than an earlier, century-spanning Bates work, Alternative Energy.

But the appeal of this new piece was considerable. A significant portion of Friday night’s audience was on their feet and cheering, summoning Bates and conductor Pablo Heras-Casado out for multiple curtain calls. None of the politely disengaged applause that often greets a new work on first hearing was in evidence. This audience cared and made it known.

Heras-Casado started winning approval with an emphatic and energizing Bartok Dance Suite at the top of the program. A kinetic presence on the podium, he carved out the tricky, entrancing contours of this five-movement piece with clarity, brightness, and unflagging charm. Bassoonist Stephen Paulson, who had a star-quality night, got things off to a strong start, with a delightfully clubfooted solo over throbbing strings.

Bartók’s mastery of folk idioms, twitchy rhythms, and nostalgic wistfulness got full value in this lively, sometimes sweet and often funny performance. Perky playfulness gave way to the patient tidal drift of the slow movement. Later on the brasses chased their tails en route to a coyly abrupt conclusion. It was a keen and supple performance throughout.

Ravel’s Tombeau, written in wry and touching tribute to his French predecessor François Couperin (1668-1733), got an equally fine reading, in an entirely different vein. Working with the delicacy of a glassblower, Heras-Casado spin spun out the four movements (from the six of the original piano version) exquisitely.

The flow of sixteenth notes in the opening Prélude rose like Champagne bubbles in the thinnest flute. The Forlane came off as a slightly woozy dance fantasy, with little leans and hesitations and a few liquid chords that recalled those melting sonorites in Bates’ Auditorium. The Menuet suggested the languid daze of a candle-lit ballroom. The Rigaudon was like a hasty rush home, with a respite in the woods — cheers once more for the woodwinds, including the peerless clarinetist Carey Bell — along the way.

Shostakovich’s compact and exuberant Symphony No. 9 brought the evening to an exhilarating close. All stops were out, from the ludicrous quarrel of piccolo and trombone in the first movement through Paulson’s mournful and tender bassoon solos and a whirling climax. A lumbering cadence here and there recalled the Bartók. A quasi-Latin theme echoed Bates’ wide-focus invocations.

By evening’s end, the connections were like a sonic light show, the beams bouncing merrily inside the listener’s brightly illuminated memory and imagination.