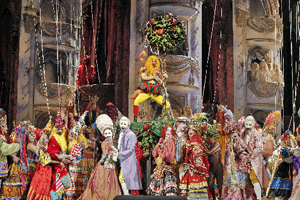 Bigger is not necessarily better, but the biggest, superbly done, is — or should be — every opera lover’s dream.

Yes, there were fund-raising parties (almost twice the size of the S.F. Symphony’s three days before), the usual fashion parade (with more shades of red and purple gowns than usual), speeches from the stage, and a lusty audience performance of the Star-Spangled Banner, but then…

Heaven itself opened up, with Ian Robertson’s mighty Opera Chorus — 90 strong and supported by 30 children choristers — first whispering from the distance, then shaking the rafters in the cavernous 3,146-seat War Memorial as they advanced downstage in a phalanx of crowned, masked angels. This is Opera with a capital O.

Mefistofele is the very model of grand, romantic, extravagant opera for the eyes, ears, and heart.

Mefistofele is the very model of grand, romantic, extravagant opera for the eyes, ears, and heart. But that was just the Prologue for the retelling of this oft-repeated tale of Faust and the Devil. (The name of the Devil and the name of the opera are both Mefistofele, so just ignore the company’s strange decision to use the Hebrew name of “Mephistopheles.”)

From the Prologue in heaven to a medieval carnival (Easter Sunday, or, say press notes from the Opera, “Kermesse,” but I hope not), to a Witches Sabbath, to Helen of Troy’s Greece, and concluding with Faust’s sudden and undeserved escape from Hell, Mefistofele is the very model of grand, romantic, extravagant opera for the eyes, ears, and heart. Through many major, difficult scene changes, Laurie Feldman’s direction of the revival went smoothly.

The score is full of sweeping, “very Italian” melodies and exciting rhythms from Verdi’s best librettist (Otello, Falstaff), who was also a fabulous composer, even if he didn’t produce in Verdian quantity.

Above all, it’s a choral opera, virtually an oratorio, and Boito is lucky to have Robertson’s Opera Chorus, singing its collective heart out, producing the “Robertson sound,” well-remembered from 1989 and 1994 performances of this production, but now even better than ever, even overwhelming at times.

The chorus was heavenly in heaven both at the beginning and in the big Epilogue closing the work; hellishly, fiendishly good in the Walpurgis Night; elegant in the gratuitous Greek scene — dressed to the black-tie nines for the sake of one funny shtick, to outdo Faust’s single rose — and having tremendous fun in the wild fair. Prepared and performing wonderfully, the Chorus also benefitted from singing under the direction of Nicola Luisotti, a former chorus master himself.

The orchestra sounded fine on opening night, but at its best it responded to stimuli from outside the pit, whether it was the chorus singing in white heat, or Patricia Racette giving a heart-wrenching performance in Margherita’s death scene, or Ramon Vargas singing Faust with a rejuvenated voice in the final scene, the tenor sounding better after more than three hours of singing than at the beginning.

Making his role debut as Mefistofele, Ildar Abdrazakov, the bass-baritone from Bashkortostan, filled the house with a muscular, big, well-projected voice, prancing around in a winning stage performance. Having more bass than baritone in the voice would have been welcome, but the range of the role coincides with Abdrazakov’s. (I hope he’ll put off his plans to sing Philip II and other true bass roles until age burnishes the lower range; he is only 37.)

Racette is a wonder … She sings fabulously and becomes the role on stage.

Racette is a wonder. Being called “a singing actress” is usually a way around maligning the vocal performance. There is not a whisper of that about Racette: She sings fabulously and becomes the role on stage — from the simple country girl to the tragic victim to the glamorous Helen of Troy. In the prison scene, she was so believable that memories of her theatrically/emotionally pitch-perfect Butterfly came flooding back.

Much as I love this opera — with its sublime, ecstatic music — it feels padded (or bloated) with the Greek scene, including some exceptionally lame ballet. It’s a good thing that the Epilogue follows immediately and that Robertson’s chorus is there, lifting both Faust and the audience to heaven. (Which, not so incidentally, in Carsen’s production, is an opera house. How true!)