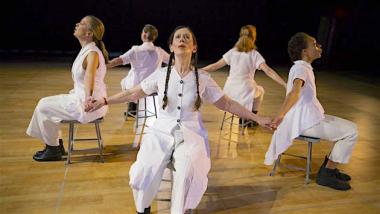 A woman, her seemingly bald head covered with bright white wisps, has now reclined for the fourth or fifth time, holding her body horizontal to the ground, balancing on the seat of a stool. This solo dance was accompanied by Allison Sniffin on piano, playing from the far corner of the stage. The dancer, Ellen Fisher, has been performing with Meredith Monk since the ’70s, and her dance, as often happens in Monk’s work, did not feel like an obvious pairing to the music — ardent minor chords rising from the piano. Yet, the combination lifted Fisher’s dance, humorful, impressive, and serene as it was, to a quiet height. I felt like I saw all of it, every detail.

Last Saturday night was the West Coast premiere of Monk’s music-theater-movement piece Cellular Songs, a project that has been in the works since 2014. In combination with film, Monk along with four members of her vocal ensemble performed a series of (mostly) wordless songs, all choreographed with simple but arresting movements. In her own words, the aim of this work was to propose an “alternative possibility of behavior, where the values are cooperation, interdependence, and kindness.”

It seems fitting that, with the performers’ simple white garb and silent, direct manners, I kept thinking that this performance could be a vision of a best-case-scenario convent. What could be more idyllic than a place for women of all ages to sit in large triangular formations and sing beautiful things to each other? That is a joke but also, in the words of Liz Lemon, “I want to go to there.”

In one transition between songs, Katie Geissinger and Sniffin approached Monk, one holding her hand, the other resting an arm around her shoulders. The trio walked away from the audience, Monk seeming like an elder between the two taller singers. The hairs on my arms lifted at that hand hold because, while this is a highly manicured performance, from half a football field away I could feel that that offered and accepted hand was a real gesture, familiarity met with open compassion.

The characters her singers play are necessarily not realistic — you’re not thinking that there’s going to be a scene where one is washing dishes and another is scrolling through Netflix. Surface verisimilitude is not what Meredith Monk is after; rather she spends her effort on the microbial level, where the moving parts of culture and people become clearer, if more abstract. These women in white smocks represent the interaction of musical lines, the concept of death, seaweed waving with the will of the ocean. This can be hard for some audience members to take; the suspension of disbelief can sag, as was heard in the odd inappropriate chuckle last night.

But some things were legitimately funny. By far my favorite dancing last night was in a piece where Ellen Fisher, short and white-haired, and Jo Stewart, a young, tall woman of color, entered the stage for the first time, arms hooked together. They bantered the same singing line back and forth to each other, slyly challenging each other with small variations, as if they were teacher and student strolling across some ideal campus quad. The interaction evolved into a kind of dance battle in which the “Gangnam Style” gallop dance appeared, bounced with silly happiness between teacher and student.

I winced; it felt awkward the way that viral internet reality just showed up in a Meredith Monk performance art piece. At the same time though, it reminded me that, regardless of how abstract these characters may be, these people that Monk writes for do not exist in a vacuum. While certain complexities are stripped away, the truth is these two women are dancers and dancers can’t resist dumb fun moves like the Gangnam Style dance. It would be easier to understand these women as allegorical chess pieces being maneuvered by Monk to illustrate her “alternative” society. It is harder, more interesting, to realize that these women, their personalities and experiences, do not disappear on stage for the sake of Vision or Art. This is how Monk creates her work, to allow people in.

Meredith Monk, ‘Magician of the Voice,’ Awarded National Medal of the Arts

Monk, a pioneer in the development of “extended vocal technique” and interdisciplinary performance, was among 10 others to received the prestigious award.