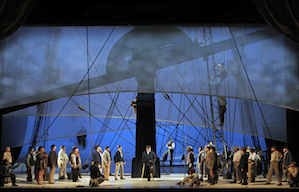 If the prolonged cheers and standing ovation of the opening-night audience are any indications, the outlook for Jake Heggie’s latest opera Moby Dick is smooth sailing. A powerful libretto, a restless yet not alienating score, and breathtaking projection and set designs wrapped galvanizing and committed vocal performances in what may turn out to be only slightly less rare than a white whale — a truly popular, post-Puccini opera.

An apparent but less-obvious source for the success is Heggie’s music. He is a master of the vocal line and of text setting. He has an ear for melody, a tonally based harmonic sense, and is adept at matching the ebb and flow of the written drama with corresponding musical devices. He is a competent if not brilliant orchestrator who can put together weighty climaxes, but might consider some increased use of chamber, soloistic textures in some of the places where the vocal lines seem to clash too much with the orchestra.

You will find no “hit” arias in this opera. Tunes are everywhere, but they are mostly roots in the orchestra only infrequently connecting to trees in the voices. The vocalists have their own fluid ariosos that often don’t fit the underlying harmonies, generating an unsettled sense of doom in the listener. Like ratlines on shrouds, Heggie concentrates on building tissues of accompaniment on a few basic motives — he refers to a “four-chord harmonic theme” for Ahab from which “all musical, harmonic, and rhythmic motifs emerged organically” as he was doing a rewrite of the piece. About the only time an immediately catching melody (“Lost in the heart of the sea”) emerges in an engrossing solo by Greenhorn (nicely characterized by tenor Stephen Costello), it sounds too sweet for the humbling grandiosity of the moment, for which Melville wrote “lost in its unshored, harborless immensities.”

“Layaway” Beauties in the Orchestra

Unlike the relative tunelessness of most contemporary operas, however, Moby Dick’s melodic roots, I firmly believe, will emerge over repeated listenings to bring pleasure to future audiences. And so many aspects of the opera are so outstanding, those repeat opportunities will be forthcoming. The eclecticism of Heggie’s style will continue to please, with its whiffs of Bizet, Britten, Glass, and Adams, even if it lacks the startling originality of prominent contemporaries like Adès or Birtwistle.

The most immediate glory of this production is the projection designs by Elaine J. McCarthy and her associate Shawn E. Boyle. The opera has much to do with how we make sense of our place in the cosmos. This theme was memorialized for me by the video that accompanies Heggie’s quietly churning orchestral introduction. It begins with the stars of the firmament and a growing number of connecting lines that morph into constellations for navigation and finally the Pequod, with its shrouds, halyards, hawsers, bights, braces, sheets, and stays that control the crew’s troubled course. 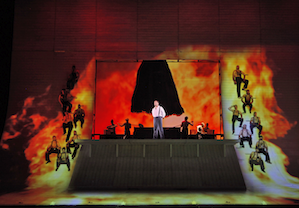 Later, the gunwales of whaleboats were projected on an upward swooping back stage along with rippling waves to suggest a bird’s-eye view of the sea and its occupants. Also in the spectacular category was Gavan Swift’s lighting for an episode of St. Elmo’s fire. One quibble is that despite the scary white sea at the conclusion, I’d like to see more of a whale than what seemed to be a giant eye or blowhole. (At least there was something, unlike the anticlimactic bomb in John Adams’ Doctor Atomic.)

Next in line for commendation is Gene Scheer’s adaptation of the Melville novel. Overwordiness is the Moby Dick that has sent many a contemporary opera to sea-bottom obscurity. Scheer cut to the bone, yet miraculously kept the Shakespearean style of the text while making the meaning clear and preserving a high percentage of the author’s own words. Two brilliant moves were to drop the initial chapters and start at sea, and save the famous “Call me Ishmael” line, usually a standard beginning, for the end where the Greenhorn has properly fulfilled his name’s destiny. Of the many substitutions of Melville’s text by Scheer, only one bothered me, the repeated, slightly more crude insertion of “tough and bloody” in place of “rare,” with respect to whale steaks.

Then there was the singing. Tenor Jay Hunter Morris as Ahab had the task of dominating Heggie’s orchestra with difficult lines that had to stay on pitch as well as dominate his crew by force of personality. He succeeded in these magnificently. Baritone Morgan Smith was the perfect foil for Morris as the humanitarian Starbuck. He was in strong voice and conveyed well his disgust and futility in trying to reason with the megalomaniacal captain. Robert Orth’s contrasting baritone did the joviality of Second Mate Stubb proud. All the remaining roles were well sung, including bass Jonathan Lemalu as Queequeg, soprano Talise Trevigne as cabin boy Pip, and especially baritone Joo Wong Kang as the secondmost humane character, Captain Gardiner. Lucky Kang didn’t even have to suit up in Jane Greenwood’s period costumes, since his voice of sanity came from offstage, accompanied by McCarthy’s effectively looming projections of his ship’s sails.

Conductor Patrick Summers kept the pacing at the correct pitch, while letting the Opera orchestra shine — as it should, for there is buried treasure in Heggie’s notes there. Finally, Robert Brill’s stage design said everything with angles rather than unnecessary flamboyance — though there was plenty of that in a whale-oil collection scene, and a coup de theatre when the stage literally chomps down, Mobylike, on the doomed Ahab.

If only house management would allow patrons greater latitude to applaud. The enthusiastic crowd at opening night could have easily gone on a second five minutes, but the curtain went down after the first.