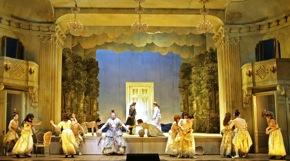 Mozart 'Musical' at the War Memorial

Grand and glorious as Mozart's 1782 Die Entführung aus dem Seraglio (The Abduction from the Seraglio) is, it's not a through-composed, sung-only "grand opera." Now onstage at the San Francisco Opera, in a new coproduction with Chicago's Lyric Opera, "Abduction" is an early forerunner of the Broadway musical, a "singspiel" with a great deal of spoken dialogue.

Of the various ways Abduction can be presented, this is a sung-in-German-with-English-dialogue hybrid. Given the other options (all-German or all-English), this is a reasonable approach, especially when — as is the case here — everything is companied by English supertitles.

The production — with David Zinn's design and stage direction by Chas Rader-Shieber — is a mixed bag. The stage-on-stage construct doesn't contribute much; singers climbing up to and down from the upper platform with the help of chairs is both dangerous and monotonous.

There is only a passing interest in the sumo-wrestler appearance and stance of the janissaries (Turkish soldiers) and even less in the repeated parading of blindfolded harem women, which is supposed to be a funny bit.

On the musical front, there is much better news, as good as the music itself which features some of Mozart's most heavenly arias and rhythmically exciting duets and choral passages and is far more important than the cockamamy story.

Cornelius Meister, a 29-year-old German conductor, making an auspicious American debut led the performance. With their deceptive simplicity and transparency, Mozart's works test even the most accomplished veteran conductors, and this young maestro led a clean, clear, appealing, well-balanced performance, allowing the voices to come through at all times.

Age seems to matter less and less these days, with Gustavo Dudamel and a handful of 20-something Russians leading their own orchestras, but it's worth noting that in San Francisco Opera's 87-year history, Meister is only the third-youngest conductor.

Old-timers automatically think of Calvin Simmons first, but it takes Kori Lockhart's meticulous records to find the information that Simmons was 23 when he conducted a student matinee of La traviata in 1973, and 28 in his first subscription performance (La bohème, 1978). Few veterans remember the second-youngest maestro, Markus Stenz, who was 26 when he conducted Henze's The Sailor Who Fell From Grace with the Sea, in 1991. Operatic bookkeeping: It's a labor of love.

Matthew Polenzani is Belmonte, the ineffectual hero with big arias. Here's a lyric tenor of the first order, with great projection and sufficient heft that increased as the evening progressed. His pianissimo passages went right to the heart. One possible improvement would be to use straight head voice instead of skirting falsetto at times.

Osmin, the amorous harem honcho (no eunuch he, apparently), a great comic bass role, is performed in the same fashion most of the time. San Francisco's Osmin, Peter Rose, is different ... and better. Instead of bellowing, this Osmin is mellifluous, a "bel canto bass," with unusual beauty of tone. His acting is hilarious, but never overdone.

Anna Christy and Adler Fellow Andrew Bidlack are a crackerjack stage team as the servants Blonde and Pedrillo, well compensating for small — although beautiful — voices with great comic acting and good looks.

On the downside, Mary Dunleavy's Constanze was short on Mozartean excellence, at least on opening night, and her voice was at times almost rough. Charles Shaw Robinson's hoarse Pasha offered indifferent diction in a speaking role. The chorus was not at its best, sounding thin and distant.

Of the various ways "Abduction" can be presented — all-German, all-English — the sung-in-German/English-dialog hybrid in the War Memorial is fine, especially as everything is accompanied by English supertitles.

There is a problem, however, with the jarringly inconsistent style of Philip Kuttner's supertitles, ranging from "thee"-and-"thou" formality to startilingly contemporary jargon. It may be meant to reflect the difference between upper- and lower-class language, but it presents an irritating time warp instead.