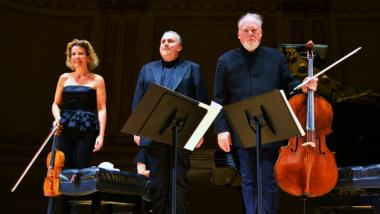 Beethoven and Tchaikovsky are often celebrated for their big, public statements, the orchestral works and operas and ballets. But it is in their more intimate chamber works that we hear a more personal sound, for these smaller pieces show off the same appealing humanism and dramatic power as the larger, legacy-defining compositions.

So it was a welcome change of pace on Sunday to see and hear the Mutter-Bronfman-Harrell Trio perform Beethoven’s “Archduke” Trio and Tchaikovsky’s Piano Trio in A Minor (“In Memory of a Great Artist”) in Weill Hall at the Green Music Center in Rohnert Park.

These chamber works may be intimate but they are not insignificant. A key pre-concert question for some listeners may have been: Would the world-traveling trio — made up of Anne-Sophie Mutter on violin, Yefim Bronfman on keyboard, and Lynn Harrell on cello — keep the music moving along at a brisk clip? Usually the “Archduke” clocks in at just under 40 minutes and the Tchaikovsky at about 50 minutes. But some performers (I could only wince at the thought) extend things well beyond 40 and 50 minutes.

Thankfully, the trio was not only energetic and propulsive but also well-balanced, showing how well the composers brought forward the string instruments instead of letting the piano consistently dominate.

Perhaps that is why the “Archduke” (dedicated to Beethoven’s patron Archduke Rudolph of Austria and written between 1810-11) is occasionally referred to as a “symphony for three musicians.” In lesser hands the moniker may not hold.

The four-movement “Archduke,” in B-Flat Major, begins with an impressively noble theme, a quality that Bronfman retained in one form or another — and Mutter and Harrell expanded —  as the music alternated between lively, lyrical, and modest throughout the first section. The pair set the tone in the second movement, a scherzo with dance rhythms, and Bronfman seemed to play in support as a waltz melody emerged.

But it was the Andante third movement, that proved to be a multi-faceted jewel of sound,  a set of interconnected variations, marked by sublime harmonies, chromaticism, and ineffable beauty, especially in the strings. [T]he serene third movement segued into a rousing fourth as the three musicians combined in unison with a rollicking rondo theme.

Not surprisingly, the serene third movement segued into a rousing fourth as the three musicians combined in unison with a rollicking rondo theme,  repeating it, tweaking it, and leading to a cascade of notes suggestive of a fun drinking song.

The Trio in A Minor, completed in 1882 and in memory of Nikolai Rubinstein, Tchaikovsky’s former teacher and longtime friend, started out and ended with all of the composer’s hallmarks. All of it was ably knitted together by masterful, singing melodies, at times warm, melancholy, and distinctly Russian, and at others florid and bright.

Harrell began the first movement elegy with an intense, soulful theme melded to Bronfman’s rumbling, percussive bass sounds. Mutter then picked up the theme, and Bronfman developed it, with all of them restating it neatly and evocatively in the end.

The variations movement ranged from the composer’s meditation on a folk tune, with moments of pizzicato accompaniment in the strings (sections that brought smiles to Mutter and Harrell’s faces as they played), a slow excursion into gloomy arpeggios, a playful mazurka, and, finally, a funeral march. As a coda, it may have summoned memories of lost friends in listeners, as it so clearly did for Tchaikovsky, with Mutter, Bronfman, and Harrell decoding it superbly.

Richard Bammer is a staff writer at The Reporter newspaper in Vacaville, where he covered arts and entertainment for more than 15 years. He was selected, in 2004, for the first-ever NEA Journalism Institute in Classical Music and Opera at Columbia University. He has twice been honored by the California Teachers Association, for a column and continuous coverage of education news and issues. He holds a master's degree in humanities from Dominican College in San Rafael. He welcomes responses and corrections about his writing at[email protected]