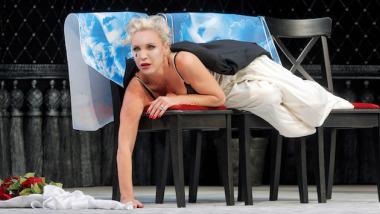 Back in 1966, when Leoš Janáček and his music were hardly known in the United States, San Francisco Opera became the first American company to present the composer’s The Makropulos Case (Věc Makropulos). Since then, the opera’s central role, the diva Emilia Marty (E.M.), has been sung at S.F. Opera by a series of distinguished sopranos, including Maria Collier, Anja Silja, and Karita Mattila.

The 2010 production, directed by Olivier Tambosi and brilliantly conducted by Jiří Bělohlávek, was built around Mattila, and the great Finnish soprano gave an incandescent performance. With this year’s revival came the natural question of how the opera would fare with a new cast and conductor.

Happily, the production is in good hands all around. Given the opera’s comparative rarity, it’s a must-see in the remaining four performances (October 18, 23, 26, and 29).

My own concerns about the revival centered around Nadja Michael, taking the role of the mysterious E.M. Michael’s previous San Francisco appearance, as Salome in 2009, received considerable praise for the intensity and physicality of her acting, while also receiving criticism for vocal inconsistency and pitch problems.

For The Makropulos Case, she’s in good vocal form, and whatever inconsistency was audible on opening night registered as consistent with the character she portrays. She brings to Emilia Marty the same theatrical flair she brought to her Salome, too. From the way Michael struts around the stage and comports herself on the table in a legal office, you’d never guess that Marty is more than 300 years old.

That’s the crux of the sometimes-confusing plot: She’s 337, and the potion her father dosed her with at age 16 is starting to wear off. If the diva can’t retrieve the formula, which is attached to a 19th-century will hidden on an estate outside Prague, she’s finally going to die. The ownership of that estate has been tied up in court for nearly a century when Marty inserts herself into the lives of the litigants, knowing far more about their ancestors than any living woman should.

In the course of the opera, which runs just about two hours, with intermission, Marty lays waste to nearly everyone around her. She seduces Baron Jaroslav Prus, one of the litigants, to obtain the formula, but only after attempting to seduce his son, Janek. Janek’s girlfriend Kristina, an aspiring singer, admires Marty to the point of hero worship, comparing her own novice efforts to Marty’s great art. Count Hauk-Šendorf recognizes Marty as his lover Eugenia Montez. They converse as though it’s 50 years earlier, and he returns with his wife’s jewels hoping to run off with his old love.

Michael walks a fine emotional line with aplomb: She is humanly alluring to nearly everyone around her while inhumanly detached from the reality of their lives and emotions. Her Marty was intensely moving as she gradually realizes that those of normal lifespan lead richer, more fulfilling lives than she does. In the end, she gives up on using the formula and nature takes its course.

Emilia Marty may be the sun around which the other characters orbit, but The Makropulos Case needs strong ensemble work, and the current cast provides it. Baritone Stephen Powell brought his warmly resonant voice and mature dignity to the role of Baron Jaroslav Prus, the current owner of that crucial estate. In his first SFO appearance, tenor Brenton Ryan was a desperately passionate Janek Prus, who becomes so obsessed with Marty that he commits suicide over her.

Charles Workman, who stepped in as Albert Gregor for the previously announced Scott Quinn, also made an auspicious company debut, with a fine tenor voice and a world-weary manner. Adler Fellow Julie Adams sang the star-struck Kristina with just the right wide-eyed innocence. Matthew O’Neill was alternately funny, pathetic, and touching as Hauk-Šendorf. Adler Fellows Zanda Švēde and Brad Walker commented sardonically on the theatrical goings-on as a cleaning woman and a stagehand, with Švēde returning as Marty’s chambermaid.

As the attorney Dr. Kolenatý and his clerk Vitek (Kristina’s father), Dale Travis and Joel Sorensen didn’t quite reach the vocal heights of the rest of the cast, though both were dramatically excellent. Alone among the cast, Travis couldn’t always be heard, while Sorensen sang with a shallow and sometimes quavery tenor.

Olivier Tambosi returned to direct this revival, and it remains much as it was in 2010, with vivid and closely-observed interactions among the characters. He has retained one deviation from the libretto that shouldn’t have been made in the first place: after Marty hands the formula to Kristina, Albert Gregor burns it, rather than Kristina, robbing the character of her wisdom and agency. In an interview at the time of the premier, Tambosi attributed this to the magnetic effect, during rehearsals, of Karita Mattila on her Kristina. Maybe Nadja Michael had the same effect on Julie Adams, but maybe not.

The beautiful 1950s costumes, in shades of black, white, silver, and gray, give the production considerable glamor, working well with the similar palette of the sets. Duane Schuler’s stark lighting further enhances the overall look and emotional impact of the production, particularly when Marty sings her farewell to life in the very last scene.

Conductor Mikhail Tatarnikov, making his San Francisco Opera debut, led a fluid and propulsive account of the score that was nonetheless surprisingly warm and lyrical.