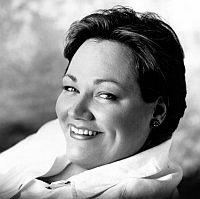 Lisa Hirsch on April 26, 2009
Members of New York’s venerable Chamber Music Society of Lincoln Center are spending April touring a program called American Voices. Thursday at Herbst Theatre, the centerpiece of the program, which spans the 18th to 21st centuries, was a new song cycle by Alan Louis Smith, Vignettes: Covered Wagon Woman. Commissioned by Music Accord, a consortium of concert presenters that includes San Francisco Performances, the work was composed for the powerhouse mezzo-soprano Stephanie Blythe, pianist Warren Jones, and the Chamber Music Society.

Smith has written for Blythe before, in a cycle called Vignettes: Ellis Island. That cycle sets the words of immigrant women interviewed on their arrival at Ellis Island, the longtime gateway for East Coast immigration. Covered Wagon Woman, 11 songs and two instrumental movements written for an ensemble of mezzo, piano, violin, and cello, sets excerpts from the journal of Margaret Ann Alsip Frink, who crossed the continent in 1850.

Blythe is very likely the ideal interpreter of these songs. Her open and positive stage demeanor and grand vocal style suit the texts, and their embodiment of Alsip’s personality, to a T. She sings with sardonic humor when other travelers doubt the wisdom of Mr. Frink bringing his wife. She projects both the awesome size of “The Mountain,” which must be climbed with great difficulty, and Mrs. Frink’s dreamy exhaustion at the close of the same song. And Blythe can scale that beautiful and mighty instrument down to a thread when needed.

Covered Wagon Woman makes an effective, absorbing, and theatrical addition to the song repertory. Smith’s music runs a gamut of moods and styles through the course of the cycle, all appropriate for the particular text he’s setting. “Buffalo Chase” is a thunderous and rapid march, “Prologue to the Journal” bounces right along, and incorporates a familiar 19th-century American tune that I couldn’t identify. The long and ghostly introduction to “The Sioux Tribe and the 'White Squaw’” uses harmonics to effectively mimic the sound of the Native American flute. Jones, violinist Ani Kavafian, and cellist Priscilla Lee made a marvelous ensemble throughout, weaving around, supporting, and partnering with Blythe.

The texts weren’t printed in the program, at Blythe’s request, on the grounds that she would like to see the audience’s faces when she sings to them, and because she feels her diction is good enough that the texts aren’t necessary. This would have been easier for me to swallow if Blythe herself hadn’t had the score and texts in front of her for the duration. As an audience member I found this distracting. Moreover, while her diction was, indeed, largely superb, I had to wait until the distribution of the text during intermission to find out what, exactly, had happened to the horses at the climax of “The Mountain.” (Spoiler: No equines died in the making of the song cycle.)

The other big work on the program was the closer, Amy Beach’s Piano Quintet in F-Sharp Major, Op. 67. Beach, a piano prodigy, composed from her teens to near the end of her long life, but today, her music little revived, she is mostly a figure from the history books. Based on this piece, perhaps it would be best for her to stay there. The biographical notes mention that she had no formal training in composition, and, sadly, it shows.

The Adagio middle movement, which revolves around a long-breathed and lovely melody, has some musical interest, but the other two movements are episodic in the extreme. It’s as though Beach had a profusion of ideas, but no sense of how to organize them formally to construct a coherent whole. The movements start, start again, and start again, going nowhere in a rather dramatic and noisy fashion. I winced when she clumsily attempted a bit of counterpoint, which, like her other thematic elements, she abandoned almost immediately. Perhaps worst of all, her ideas are banal at best, of the quality I’d expect to accompany a silent-movie potboiler. Pianist Anne-Marie McDermott, Kavafian, violinist Lily Francis, violist Paul Neubauer, and Lee gave a committed and passionate performance; how I wished they’d been playing the Brahms quintet instead.

Preceding the Beach came George Gershwin’s Lullaby for String Quartet, which dates from 1919 or 1920. A gentle score loosely written as a dance-rhythm rondo, it left me wishing the performers had thrown away the score and dared to play from memory and with more swing. Opening the concert was a real find, a Trio for two violins and cello by the American John Antes, who lived from 1740 to 1811 and spent his entire adult life in Europe. Played with elegance, grace, and beautiful tone by Francis, Kavafian, and Lee, it was everything the Beach was not: sprightly, well-proportioned, charming, and concise.