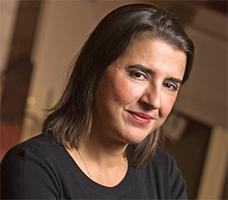 The New Century Chamber Orchestra began their 20th season Thursday in Berkeley’s First Congregational Church with a fascinating program of works exploiting antecedent musical styles — but it didn’t matter: The ensemble’s commitment, technique, synchrony, passion, and sheer joy of music-making was so impressive, it could have just as well played “Pop goes the weasel” 100 times in succession, and I would have been equally mesmerized.

Concertmaster and Music Director Nadja Salerno-Sonnenberg began the evening by welcoming patrons and thanking her two preceding directors for their work in helping to bring the organization to its present level of regard. Founding Director Stuart Canin responded later with an utterly satisfying rendition of Felix Mendelssohn’s “other” violin concerto, the D Minor. Salerno-Sonnenberg’s immediate predecessor, Krista Bennion Feeney, will likewise be showcased with a Haydn concerto in December.

The concert began with Ernest Bloch’s Concerto Grosso No. 1, which replaced earlier announcements of Bartók’s Music for Strings, Percussion, and Celeste. If any Bartók fans were about to be disappointed, the performance quality of the Bloch must have given them pause. Here was a 1925 piece harkening back to forms and procedures of the 18th century, part of the wave of neoclassicism that followed World War I. While clarity of orchestration was not one of Bloch’s strong points, Salerno-Sonnenberg made up for it in precision of attack, and forcefulness of execution that highlighted the inherent drama of the music, especially in the Prelude and Dirge movements. The dramatic qualities, underlined in the NCCO’s interpretation, made the work seem much closer to the Romanticism of the 19th century than its purported Baroque lineage. The Rustic Dances movement even sounded right out of a Gustav Holst, British playbook.

This stylistic cross-dresser of a concert continued with Mendelssohn’s 1822 D-Minor Concerto, an incredible achievement for a 13-year-old. Yehudi Menhuin unearthed the manuscript in 1951 and performed it widely. While it lacks the great melodies and mastery of form that characterize its more famous E-minor brother, the stylistic searchings abounding in the music (not surprising for a young genius finding his way in the musical universe of his time) make for an intriguing listening experience. Much influence could be traced to the Bach family, little to the Viennese bigwigs of Mendelssohn’s day, Haydn, Beethoven, and Mozart. Yet on top of the source models, the young composer’s original harmonic sequences seem to wrench the music back and forth from 1760 to 1822. This is a very engaging alternative to the Mendelssohn warhorse that normally is as common to programs as flies in summer, especially when performed so well by Canin and company.

The second half of the evening was devoted to yet a third style-shifter: the 1967 Carmen Suite by the Russian composer Rodion Shchedrin. This ballet music can be viewed now as part of a movement that later flowered into postmodernism, the obsession with pastiche and quotation that hit many composers in the 1970s and 1980s. Since modernism itself was deeply frowned upon by Soviet authorities, it was probably easier to go the proto-postmodern route in the USSR than it would be to enrage critics with the same in the West (Luciano Berio raised a hornet’s nest, for example, with his Sinfonia quoting Mahler). Shostakovich certainly took the path big time in his last symphony, the 15th, but he had been quoting extraneous stuff throughout his career.

Shchedrin’s ballet takes Bizet’s music for Carmen, adds a bunch of hyped-up percussion instruments, and throws tunes from the French composer’s L’Arlesienne Suite No. 2 into an only slightly more modernized revisit to the popular classic. The result is most entertaining when there is sudden alternation between segments of radically different mood. Other sections,by contrast, go on for too long (the 12-part suite lasted nearly an hour). Throughout, Solerno-Sonnenberg and her ensemble did their utmost to liven things up, even by wearing colored hair ribbons or ties. On occasion, some of the percussion sounds, unfortunately, were a bit too live for the venue, drowning out the strings.

Although the composers featured in the program were thinking strongly about their predecessors, patrons of the NCCO, on the other hand, should instead think about the future. With a team this superb, it’s time to scarf up tickets for the rest of the season.