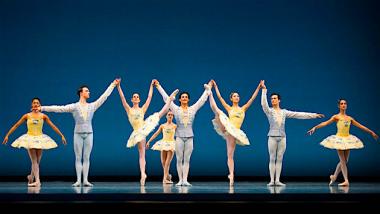 The diversity as well as the great good looks of the San Francisco Ballet’s second repertory program embodies in its three works some fascinating lessons.

The show, “Kaleidoscope,” which opened Tuesday night at the War Memorial Opera House, presented George Balanchine’s 1956 Divertimento No. 15, set to Mozart; the San Francisco Ballet premiere of Appassionata, after the Beethoven Piano Sonata No. 23 in F Minor, choreographed in 2016 by Benjamin Millepied for the Paris Opera Ballet; and last year’s Unbound Festival premiere by Justin Peck, Hurry Up, We’re Dreaming, a sneaker outing set to several contemporary composers.

Transplanted from the New York City Ballet, Balanchine’s Divertimento, first performed by S.F. Ballet in 1979, is a treasure of the repertory, beautifully showcasing over the generations the company’s rising and established stars. It has aged not a whit and the current level of the company’s artistry places it in a high firmament. Nonetheless, it is richly personable and often even playful, meticulously staged by former City Ballet principal dancer Elyse Borne, who danced in it the night that Balanchine died, and then retired from the company.

Divertimento is an object lesson in Balanchinean neoclassicism, demonstrating the elasticity of the style that admits quirky, pretty passages like the little foot beats as ballerinas who’ve been lifted into midair fill their moment, making the move so much more memorable than a mere takeoff and landing. Or the jokey little passés executed as if by a marionette, imaginary strings on the arms pulling the free foot up its path to the standing knee, or those amazing whirligig jumps known as gargouillades, each flexed leg twiddling inward in midair. It’s all fun because of the dancers’ mastery of the dead-serious technique behind it. And huzzahs to the three principal males among the 13 women soloists, corps dancers and principals. The men — Tuesday, they were Benjamin Freemantle, Angelo Greco and Lonnie Weeks — are great leapers and turners, but as attentive partners they positively glow. The vivacious, spot-on principal women were Sasha de Sola, Isabella Devivo, Mathilde Froustey, Koto Ishihara, and Julia Rowe.

With Appassionata, titled at the Paris Opera Ballet La nuit s’achève (The night is fading), comes another example of the flexibility of neoclassical style. This love story — you can tell it’s about love because choreographer Millepied is the Black Swan choreographer who married the Black Swan herself, Natalie Portman — runs beyond the gamut, from love to lust to rejection to joy to play, all by changing levels of intensity, which change the movement of the dancer’s body, and thus the dancer’s character, in revelatory ways. There’s a whole story, for instance, in the way Elizabeth Powell, she of the streaming long black hair, launches herself at Jaime Garcia Castilla, her legs knifing the air, and in the way that he responds.

I will confess that in this roundelay of six lovers, that’s three couples, lost, found, and betrayed, I lost track of who was zooming who, but the partnering was ever gorgeous, especially the happy oh-so-conscious coupling of Dores André and Ulrik Birkkjaer, in white jammies. Each couple (the third was Sasha De Sola and Benjamin Freemantle) had their moments in pajamas in the night. The women’s daytime dresses, by Alessandro Sartori, in drifty red, blue, and purple (the guys wore jumpsuits to match) were echt Parisien. Mungunchimeg Buriad was the amazing pianist. Perfect for Valentine’s Day, if you’re getting along.

Justin Peck’s Hurry Up, We’re Dreaming looks better and clearer and more entertaining on second viewing. But Terpsichore in sneakers is not without multitudinous drawbacks. In going after a wider, younger ballet audience, putting dancers in sneakers and investing them with the appropriate metallic duds and hip hairdos, the friskiness and the angular extremities, some of what dance troupes hope to gain is sadly lost, and for all time. You can, for sure, evoke a Swan Lake pas de deux if you pair a woman in white shorts, top, and tennies with a man in black. And these particular dancers, Elizabeth Powell and Luke Ingham, are beautiful even as they evert hands and invert feet. But you can’t rise above admiring their unexpected and evocative grace. How well can you move in a pair of Cons? It’s woefully limited by reaching for a lower common denominator.

Condescension, however well-intended, can be fatal. Once you’ve enjoyed the soulful glances heavenward of a circle of young people, and the easy conviviality of a woman in a ponytail with her admiring peeps, and the boogie that’s dying to be a novel Lindy but is stuck with hip-hop in its goal of approachability, you, too, may feel stuck.

And that’s not a reflection on the talented Mr. Peck, a man of his time, just as Jerome Robbins was a dance-maker of his time when he choreographed New York Exports Opus Jazz for the City Ballet in 1958. Robbins, though, took jazz dance farther than ballet had ever taken it before, daring to move past constraints implicit (or so it was thought) in jazz versus ballet, and creating what became a huge hit.

Is this the difference between genius and mere brilliance? Who knows?

Körper examines the very essence of our corporeal existence.