A New Recording of Proving Up Crackles With Energy

Last summer, in the pre-Covid paradise of live performance, West Edge Opera made a major splash with Breaking the Waves. Adapted from the perfervid Lars von Trier film about a woman’s sexual pandemonium following an incapacitating injury to her husband, the opera featured an intense yet delicately wrought score by Missy Mazzoli and sharply etched libretto by Royce Vavrek. 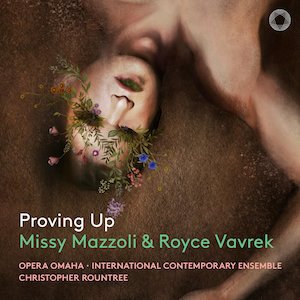 In Proving Up, these same well-matched collaborators turn to a Karen Russell short story for their potently charged material. A co-commission of the Washington National Opera, Opera Omaha, and Columbia University’s Miller Theatre, the chamber opera premiered in 2018. The 80-minute work is now available on a Pentatone recording. At once hauntingly suggestive and (mostly) barrel-tight, it seizes the imagination.

Like Waves, which takes place in a stern Scots Calvinist community, Proving Up plays out in a narrowly circumscribed world that isolates and amplifies the drama. Set in Nebraska in the 1860s, the piece employs a curious provision of the Homestead Act to animate its story. In order to qualify for and retain their land grant, residents had to include a window in the homes they built. With glass at a premium on the prairie, the condition, monitored by inspectors, could be hard to meet.

Russell is best known for her neo-Gothic fiction set in the Florida backwoods (Swamplandia!). Here, a tale of Midwestern settler aspiration and anguish has the spooky touch of two dead sisters who haunt the proceedings as singing ghosts. A mysterious Sodbuster looms large in a later scene.

Pa and Ma Zenger (baritone John Moore and soprano Talise Trevigne) are the flinty, forward-looking builders of a new sodhouse. “Uncle Sam is rich enough to give us all a farm,” they exult early on. “People do the voting and children go to school,” goes another line, which can’t help pinching a little for listeners in this pandemic election year. Proving Up is no time-locked period piece. In its dramatic and musical exploration of the American homeowner dream, it finds the complicating shadows in all those wide-open spaces and boundless hopes.

You hear it soon enough in Mazzoli’s subtly colored orchestral score, performed by 12 musicians under Christopher Rountree’s sensitive baton. A fiddle riff turns hesitant, then harmonically skeptical. A thrumming orchestral backdrop seems to celebrate the “house of sod,” breaking into ascendant chords, only to disintegrate and slide away, like water off a pane of glass. There are lots of melting glissandos, slurred notes, elusive surfaces.

Mazzoli can evoke the broad vistas of Copland or Roy Harris, use a vibraphone to add an eerie shimmer or bring a trumpet forward for an insinuating comment. Woodwinds murmur in the distance. A harp and even a deliciously incongruous harpsichord make telling guest appearances.

The writing for the voices is choice, from urgent, yearning solos and translucently layered ensembles to the eerie cross-chatter of the two ghost sisters (mezzo Abigail Nims and soprano Cree Carrico). All, including tenor Michael Slattery as the son who sets off on a fraught mission about the window and bass Andrew Harris as the Sodbuster, give strong, distinctively characterized performances.

Proving Up is a vividly peculiar work. Even a listener following closely is likely to be baffled or disoriented at times. The long Sodbuster scene, raw and riveting as it is musically, comes as a somewhat confounding episode late in the action.

Some of the puzzlement, no doubt, would become both clearer and richer in a full staging — and perhaps more productively murky as well. Mazzoli and Vavrek, as Breaking the Waves affirmed, are essentially theatrical creators. They don’t write music and words to stand alone but rather to set up chain reactions with the three-dimensional spectacle of opera onstage. Oh, how we do miss the genuine live article.

That said, Proving Up makes for compelling listening. Both the expansive Nebraska landscape and claustrophobic forces of psychology, family, bureaucracy, and blasted hopes are fully present. If those vectors become tangled now and then, this vivid work crackles with the dangerous, captivating force of heat lighting.

In the Indie Classical Lounge