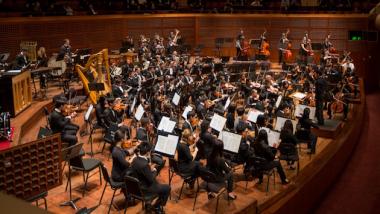 Like a backwards fireworks show that placed the big bangs and brightness at the start, then diminished its output, the performance began with 173 musicians packed onstage as the Oakland Symphony Youth Orchestra, back from its Cuban Tour, joined the Symphony for George Gershwin’s Cuban Overture. After the rousing opener and a stage-shuffling pause, guest violinist Kelly Hall-Tompkins joined the orchestra and grabbed the surreal with the U.S. premiere of Siegfried Matthus’ violin concerto Dream of a Summer Night. It was a spectacular start to the evening.

Sadly, the show’s early promise was diffused after intermission by questionable and switchback-style programming. Morgan has set himself the task this season of bringing to light “lost” or overlooked works. Instead, “lost” on Friday night came to mean the loss of early energy that had been fueled by Gershwin’s slippery blues melodies and rapid rumba rhythms — and elevated by Hall-Tompkins’ seeming ability to take hold of sonic whirlwind fog or command high-flying solo passages reminiscent of flocking birds.

Specifically, the second half’s unfortunate programming left behind a disjointed impression created by executing too many hairpin turns between a pair of crowd-pleasing but disconnected solos featuring Hall-Tompkins (John Williams’ Theme from Schindler’s List and a selection from Fiddler on the Roof) and Joachim Raff’s atmospheric but lackluster Symphony No. 3. Although Hall-Tompkins played the Schindler’s selection with luminosity and then added sparkle with the excerpt from the Fiddler role she is currently performing on Broadway — and Morgan’s leading of Raff’s rarely performed 45-minute symphony was determined and sophisticated — the works withered on the vine. In terms of the overall impression, the show was a bit like a collection of wayward orphan children: individually precious, but lacking family unity.

Focusing on programming is a diversion from concentrating on the quality of each work, but given that the orchestra has a history of impressive, innovative programming — the subject rises to noteworthy. An attempt to juggle the pieces into a more effective order reveals little except that they were mismatched — and in the case of the Raff especially, perhaps some works are rarely performed for good reason. It’s something to consider.

But, ignoring the concert’s overall arc, the symphony created islands of happiness.

The performance displayed the breadth of talent operating under Oakland Symphony’s hat. The OSYO musicians spread like confetti and scattered amid the “less-young” symphony musicians delivered Gershwin’s brisk jaunt — stimulated by a trip he took to Cuba in 1932 — with the verve of a street party. A mournful clarinet solo in the work’s slower middle section, well-played by OSYO’s Jack Conklin, created an effective counter mood.

Hall-Tompkins demonstrated why she is popular on the soloist circuit. In a performance that was unaffected, but consistently evocative, she toyed and teased during early back-and-forth with the orchestra; grew agitated and fitful until soothed by the cellos; clopped like a workhorse in an exchange with piccolo, tuba, and others; and cast a haunting magical spell before gathering the reins in noble, assertive gestures that swept the orchestra into her current in the final movement. Like the moonlit strolls in the country that inspired Matthus’ four-movement work, the journey led by Hall-Tompkins was magical, restless, dreamy, and well-balanced in an uplifting brass chorale “sunrise” ending.

Raff’s Third Symphony was first performed in 1870. The four movements — presented without interruption and connected by a single note played by French horn — bear subtitles that purport differentiation but were corporately characterized by a restive quality. The opening Allegro: "By Day, Impressions and Feelings" flitted from horns to woodwinds without settling. "Dreaming" buried itself in the strings until lifted by a languid melodic clarinet, lushly played by Diane Maltester.

The symphony’s brass and woodwinds had a terrific night, rendering the second half of the middle section’s Allegro assai: "Dance of the Dryads" with puckishness and virtuosity. Raff’s overlong finale (even its title is too long: "At Night. Stillness of the night in the forest ...") built textures and dissolved them in repeating cycles that climaxed too many times, but showed off the symphony’s mercurial finesse. Although it may not have led to the most satisfying program, the orchestra’s best playing comes — and came in full force on Friday night — in works that require versatility.