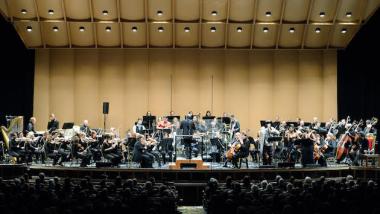 “Failure to communicate” may be a weak euphemism for the partisan standoff which resulted in the shutdown of U.S. governmental operations on Friday evening last. But splendidly successful communication was the highlight of the happening at that same time at Oakland’s Paramount Theater.

Michael Morgan, at the helm of Oakland Symphony, inaugurated the orchestra’s new Playlist series, delegating the choice of program to standup comedian-turned-Emmy-winning-CNN-host W. Kamau Bell, additional celebrity as an activist seemed perfectly fitted to the Trumpled moment-in-time. Bell, when not seated downstage left, acted as the lodestone of affirmative community spirit (he’s raising his kids in the Bay Area) and as host of the musical proceedings. Though eclectic, even by the genre-mixing standards of Morgan’s ensemble, the selections all bore personal importance for the host, to which he testified, beginning with the African-American church anthem, James Wheldon Johnson and James Rosamund Johnson’s “Lift Every Voice and Sing” (1905).

Throughout most of the first half of the program and in parts of the second, amplification and balance were less than perfect. In the anthem, the Oakland Symphony Chorus Chamber Singers rather overpowered the downsized orchestra, and the pace of the offering somewhat diminished its inherent majesty.

Introducing Todd Rundgren’s “I Love My Life,” Bell pointed out that “a lot of my choices reflect this political era — or, error.” This was the first of several selections to feature the Jazz Mafia ensemble, seated, more or less, at the center of the stage, and compelling vocalist Sólás B. Lagee, a Richmond resident and an alumnus of the Ruth Asawa School of the Arts and the Berklee College of Music. The elements of the arrangement, by the Jazz Mafia’s Matt Wong, were a bit hard to make out, though it was sometimes tough to tell problems with the sound from problems inherent to the arrangements. The delicate testimony of Nina Simone’s “Feeling Good,” sung here by Moorea Dickson and Moe Tar, was a bit sullied by a bumptious arrangement of the orchestra’s string section.

Bell chose a few light symphonic pieces, among them Rimsky-Korsakov’s Flight of the Bumblebee, for which he offered humorous justifications: This is the sound of me scurrying around the house, this is what it’s like to be a parent, and so forth. The Chamber Singers returned for “Swing Low Sweet Chariot”, in an arrangement rather devoid of dynamics. In the first half's concluding Prince medley, the Jazz Mafia’s arrangement of “Take Me With You” was rather uninspiring, but “Let’s Go Crazy” had some folks up and dancing.

Khachaturian’s Saber Dance was an example of the inherently lively material well-commanded by Morgan and lustily handled by the Symphony. That the sound system may have been somewhat successfully tweaked during intermission was evidenced by another Simone signatory, “Mississippi Goddamn,” arranged and sung by Sólás (as he calls himself) but also featuring the powerful vocalist Zakiya Harris, who interjected timely place names like “Haiti” and “Oakland” into the song’s titular refrain. The sophistication of the melody allowed for a more successful integration of the orchestral elements. Similarly, Jimi Hendrix’s “Power of Soul” showcased the Jazz Mafia’s electric guitarist to good effect. Alas, reggae legend Bob Marley’s “Three Little Birds” gained little and lost much, particularly melody-wise, in the Bobby McFerrin-wannabe arrangement for a trio of close-harmony singers called the T-Sisters. Living Colour’s “Pride” never had much melody to lose in the first place, but its presence was enhanced here by the reliable force and credibility of Sólás.

Bell’s respect for the jazz canon was reflected in his choice of a section of John Coltrane’s A Love Supreme, featuring the Jazz Mafia’s Tommy Occhiuto on tenor sax. It was rather a different experience from the Coltrane Quartet’s original recording, or from later faithful homages, in that the integration of the orchestra layered a sort of Gil Evans gloss over the primal passion, with an irresolute conclusion. Occhiuto’s playing, though impressive, was far more technical than expressive.

The program was brought to a rousing conclusion with Tears for Fears’s “Sowing the Seeds of Love,” the less than memorable melody and harmony (except for the title chorus) enhanced by a gathering on stage of all of the evening’s vocalists. “Take it out onto the streets,” Bell advised, and he was heeded by the racially and generationally mixed audience. The Symphony's programming will also continue to take on this sort of genre freedom and experimentation: watch for the Femme Fatale Mixtape at the Starline Social Club, on February 1.