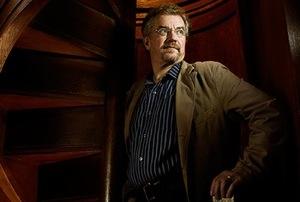 Offbeat, Yet on the Beat

Embodied Spirit: The Journey of a Famous Violin

The Mendelssohn performance had the air of an occasion, because, as reported earlier in SFCV, SFS Concertmaster Alexander Barantschik plays a famous violin indeed. Now the property of the City of San Francisco, it was owned previously by both Jascha Heifetz and Ferdinand David, once concertmaster of Mendelssohn’s own orchestra, the Leipzig Gawandhaus. It is probable that David used this very instrument to play the premiere of the Mendelssohn concerto.

For better and for worse, what Barantschik offered was a classical and somewhat cool performance of the concerto, with more emphasis on its grace and balance than on its stormy emotional side. Poised and careful rather than carefree, and playing with lovely clear tone, Barantschik seemed a bit stiff and square, wanting more Romantic passion and freedom. For all of the care he took, at a couple of places he was surprisingly out of tune with the orchestra, most notably in the phrase ending immediately before the transition from the slow movement to the finale. Behind him, Vänskä and the orchestra gave a sweeping and supportive reading. How wonderful it was to hear the prominence the conductor gave to the big cello countertheme in the last movement.

By what must have been a happy coincidence, the Larcher and the Vaughan Williams made an unexpectedly apt pairing, because, written about a century apart, both incorporate music of varied styles through pastiche or direct quotation.

Red and Green, in two contrasting — but related — movements, lasts about 20 intense, concentrated minutes. Written for an enormous orchestra that includes quadruple winds and four percussionists, the work opens with a quiet hum that becomes a piano ostinato that, in turn, becomes an orchestral ostinato. We hear an allusion from Also Sprach Zarathustra in the form of a chord that shifts from minor to major and back to minor. As the other instruments join in, there’s a deep and sinister sense of doom: I thought the orchestra was about to explode. Instead, it slowly winds down, then restarts like a vast machine coming to life, with upward chromatic scales throughout the orchestra.

By the time the two movements concluded, this vast postmodern work had touched on Renaissance dances — which emerged as an eerie surprise from the welter of sound as a violin solo played by Associate Concertmaster Nadya Tichman — and tropes of war music, Parisian café music (played by an accordionist, no less), horror movie music, and even Danny Elfman’s film scores. The collage of styles and gestures worked well together, unified by gestures such as the thudding ostinato. The work and composer got a big round of well-deserved applause at the end. I hope we’ll get to hear Red and Green again.

The symphonies of Ralph Vaughan Williams are played too rarely in these parts (meaning in the U.S.), and that’s a pity. For some reason, stateside programmers have a preference for his short pastoral works, such as The Lark Ascending, the Greensleeves and Tallis variations, and other folksong-based pieces. His pastoral side is never far away, but Vaughan Williams’ nine symphonies encompass a rather wider range of styles and deserve to be heard far more often than they are.

A London Symphony, his second, was composed from 1911 over the next two or three years, then revised several times before reaching its final form in 1933. That’s the version played by Vänskä. It’s formally discursive and quite long, despite the conventional four-movement structure. I suspect that an early 20th-century Londoner would understand more of Vaughan Williams’ allusions than I did, but certainly the outer movements audibly evoke various urban motifs, whether through a particular type of bustling or through specifics such as the Westminster chimes heard on the harp in both movements and various dance-music styles that pop up. The musical textures and harmonies also evoke Debussy, in the slow introduction to the first movement, and perhaps Sibelius. Some of Vaughan Williams’ friends heard references to Charpentier’s Louise, and in the variety of sounds that parade by, you can hear a certain similarity to the procession of Parisian noises and characters in that opera’s second act.

Vänskä’s great talent for maintaining forward movement and dramatic tension stood him in good stead, given how discursive the symphony is. The orchestra played like a dream, from the transparency of the strings to the mighty wall-of-sound outbursts in the brass. English horn player Russ deLuna stood out in the second movement, and violist Yun Jie Liu’s gorgeous solos in the last movement deserve special recognition.